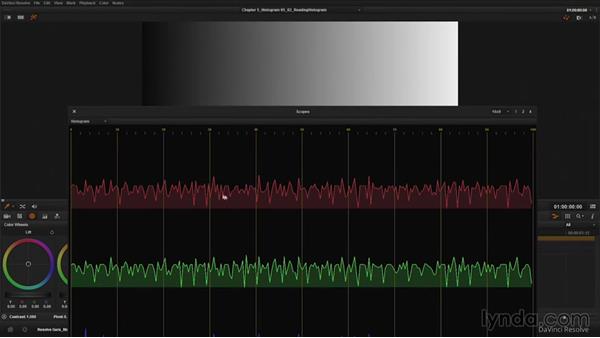 Join Robbie Carman for an in-depth discussion in this video Reading the Histogram, part of DaVinci Resolve Guru: Mastering Scopes.

- Compared to the waveform in RGB Parade, the histogram takes a more statistical approach to measuring the video signal. I like to use the histogram to double check or to verify things that I'm seeing on other scopes. But as I mentioned in an earlier movie, you may already be familiar with the histogram, and if you are, that's great. You can use it as a single tool to evaluate contrast and color, but if you're not familiar with reading a histogram, let's take a look at how to do that in this movie.

So I have the timeline 05_02_ReadingHistogram opened up, and just like some other sequences, I have three shots on this timeline. So I just want to make sure that I'm on the first shot, which is this black to white gradient. Now that I'm on the first shot, I'll press opt or alt + f to go back into my enhanced viewer, and then I'll open up my scopes by using the keyboard shortcut shift + control + w, or if you're on the Mac, that's cmd + shift + w. Okay, so obviously we are looking at this black to white gradient.

That's actually kind of important. Some tools give you the option of a LUMA only histogram. The histogram inside of Resolve is always going to be the red, green, and blue histogram. That's okay, we can still use it to evaluate contrast, and of course, because it's RGB, we can use it to evaluate color balance. Now right now as I said, I'm looking at this black to white gradient and I'm seeing some spikes here that go up and down. Now I'll be honest with you, one of the reasons that I'm seeing some spikes here is because this gradient is not perfectly smooth.

I do have a little bit of variance, but this is a good way to illustrate the following point: that these spikes represent how many pixels in the shot that I'm looking at have that particular value. So this spike right here means I have more pixels that are about 40 1/2 or 41% right there. Then I do pixels that are right here at about 41 1/4. Now if I go down to the next shot in the sequence, you can see that I have some steps here.

We've already seen this image. This is my stepped gradient, and you can see very clearly where I have those steps here at 10, 20, 30, 40, and 50%, and so on. Again, the histogram is going to mimic the total range just like the waveform does. Indeed, if I go to my two-up view here and I show the waveform side by side with the histogram, it's very easy to see the same kind of steps. Now if I go the third shot in this timeline, which is a real world shot, and let me go back to my one-up view, here is the histogram.

Again, you can see these spikes here on the histogram. The taller a spike is, the more pixels I have in the image at that particular value. Now in just a little bit, we're going to take a look at evaluating contrast and color with a histogram, but I think you should see now that it's pretty easy to read the histogram. It mimics the total range going from 0 to 100, and the spikes that we have on each one of these displays represents how many pixels I have at that particular value.

So much like the waveform, and as I'll show you a little bit later, the RGB Parade, the histogram can be used as a tool to evaluate contrast and color, but it does so in more of a statistical way rather than truly mimicking the picture from left to right or showing us sort of the density of that image with an actual trace. It does it with these spikes of pixels. So let's put what we've learned here into practice and look at a few shots in the next couple movies evaluating the contrast and color of each, using the histogram.

4/2/2015
In this installment of DaVinci Resolve Guru, colorist Robbie Carman guides you through how to use video scopes in DaVinci Resolve to properly evaluate footage. But using scopes is not just about footage evaluation. This course will also explore how to use video scopes to guide your creative decisions and show why scopes are so important in helping overcome some of the limitations of the human visual system. Tune in and learn how to evaluate color, contrast, and skin tone; match shots; and develop repeatable color looks.
Topics include: