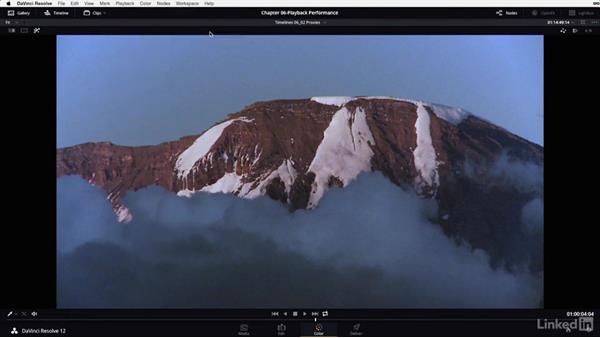 If you’re working with Camera Raw footage, you may find it taxes your system and destroys real-time playback, making it impossible to accurately judge your color corrections. Creating Optimized Media allows you to pre-render your Camera Raw footage and use that new media for playback when editing and color correcting. Learn how execute this nifty workflow.

- There's another solution for increasing playback performance, and to me, it's kind of the sledgehammer solution. It's just, "You know what, "I don't care about the quality of the image, "I just want you to play back." And that's what we're gonna look at right now, and it's for proxies workflow, or working with proxies. I mean, what's it really good for? It's good when you don't wanna wait. The Render Cache: you turn it on, you wait for the renders. You decide you wanna use an Optimized Media workflow, well you have to wait for all that media to become optimized, to render.

Proxy Mode throws all of that away, and we've got two choices here: Half Resolution, or Quarter. Let's just do Quarter, and see what the heck that does for us. I'll select Quarter Resolution. I'm gonna Shift + F. Let's hit Play. And on the R3Ds it doesn't have a huge effect. Why? Because remember: R3D is camera raw. The really big hit on this particular shot, is in Debayering, taking this raw data, turning it into a digital image. So the Proxy Mode won't help with that, I'll have to find another solution for that R3D shot, but let's take a look at this Pro Res footage.

I'll continue hitting Play, and notice it's gotten all noisy. Look at this. There's all this fine detail in here. Let's put this into Loop, and it's just crawling on us. Really low resolution. If I go ahead and turn off the Proxy Mode, here's what the image actually looks like. It's very nice, very clean. I'm getting a little shimmer, which is probably from the atmosphere, because it's such a long shot. But if I drop this Proxy Mode down to Half Resolution, and hit Play, I'm starting to get a little bit more noise, but what'll happen is, I'll also get more playback performance, because it's only playing me back a very small portion of the image.

At Quarter Resolution, you just take a 1920 by 1080 image, divide that by four, and that's literally what we're looking at here. At Half Resolution, we're playing back an image that's 960 by 540, and filling it into a 1080 screen, and so that's how DaVinci Resolve increases your playback performance when you're in Proxy Mode. And that's why I call proxies the sledgehammer solution.

It's very over-the-top, it's kind of an extreme solution, especially if you're just working with 1080 footage in a 1080 timeline. You're just, you know, a Quarter Resolution, it's like a postage stamp blown up into the entire window. It looks terrible. You can't really evaluate your image, so when I get to the point where I feel the need that proxies are the way I wanna go, I start rethinking, am I working on the right rig for this particular job? The one time where it does actually make sense, is if you're playing back larger than 1080 footage in a 1080 timeline.