What is shot matching? 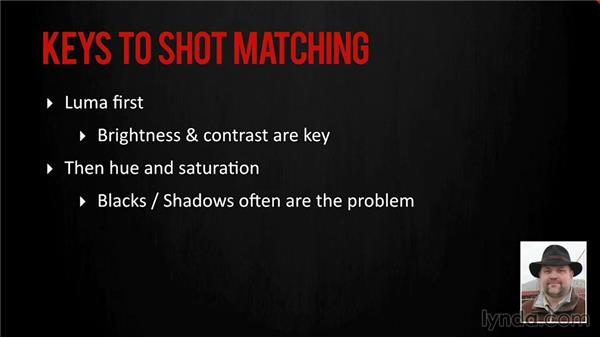 What is shot matching? In DaVinci Resolve 11, it is the process of making shots resemble surrounding shots in the timeline. It creates an edit that looks seamless, and it does not call the audience's attention to any jarring or unusual differences between shots. Work on brightness and contrast first, across shots in a scene, and then focus on saturation and hue. Blacks and shadows are some of the most common sources of mismatches in shots.

- In this movie, we're going to talk about shot matching because we're going to do a whole chapter on this and all the tools that I use to enable shot matching but I first want to lay the foundation of what the workflow looks like and what it is we're trying to achieve. The first question is what do I mean when I talk about matching shots. What I'm talking about is taking individual shots and making them look and feel like the shots that surround them.

What I'm looking for is seamless, continuity, and it helps me maintain the suspension of disbelief. Editors will often talk about the seamless edit. That's what we're here to do, which is take what the editor has done and ensure that there's nothing that calls out edits to the audience as it relates to brightness, luminance, saturation and hue. We just want the program to flow and wash over the audience, and not draw attention to our edit points.

You intentionally set your gamma. Once you've got that set and working between your shots, hue and saturation, that's the next place to focus on in terms of getting your shots to match. Believe it or not, one of the big areas that will trip up young colorists: blacks, the shadows. Oftentimes, skin tone mismatches. You fix those not in the gammas, but using your shadow controls, using your lift controls.

But generally speaking, no matter what app I'm working in I start with luma first, then hue and saturation. There actually are some technical reasons why I do this. They're kind of beyond the scope of this particular training and in DaVinci Resolve, it's really not that important because brightness, hue, and saturation all interact with each other. But there are other apps out there where you absolutely, it makes total sense to do luma first, and because of that, then my recommendation is to get into the habit of first setting brightness and contrast, then move to hue and saturation.

What I'm going to suggest is a three-step process. Step 1 is you normalize the image. This is the base grade we've been talking about up to this point in this training. We're talking about working our primaries, working our secondaries, setting our color balance. As I just said, set our highlights and shadows and use our secondaries to fix problems on each shot not really worrying about if they're matching. Then Step 2, add a new node, and that becomes your shot matching node. I get lots of questions.

"Patrick, can I just take the node I did my normalization "where I set my black balance? "Can I just use that node to do my shot matching?" My answer is don't do that. It's much easier to break this down into several different steps. As you gain more experience, and what I mean by experience is if you're working three or four years almost on a daily basis color correcting footage, then at some point, near the end of that three to four years you're going to start collapsing these two steps.

You'll be able to normalize the image and do shot matching relatively quickly as you learn to build the kind of visual memory as you remember the shots you've already graded. You'll be able to fix the image, as well as do the shot matching in one step. But until you've gotten to that point, until you have that kind of experience under your belt, try breaking this up into two steps. The third step that I'll mention is creating the look, which we'll be talking about in a later chapter and yes, that would be another node and often multiple nodes after you do the normalization and after you do the shot matching.

Now that I've laid the ground work, it's time to take a look at all the variety of tools that DaVinci Resolve gives us for shot maching and believe it or not, there are a multitude of ways for us to pull up one shot and look at it so that we can match it to another shot.

Video: What is shot matching?