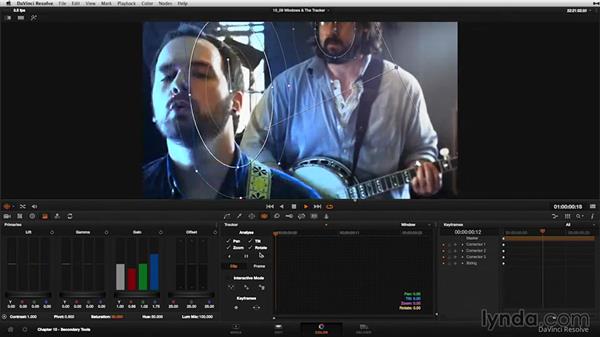 Enhance the color, contrast, mood, and style of your video projects with DaVinci Resolve 11, the powerful color-grading application from Blackmagic, and its free counterpart, Resolve Lite.

- [Voiceover] Hello and welcome to Davinci Resolve 11 Essential Training. I'm Patrick Inhofer and in this title we're going to dig deep into Blackmagic Design's very rich and high quality color correction software, Davinci Resolve. My goal for you is to have you comfortably color correcting and grading in Resolve, understanding not just the tool set, but understanding the core techniques and workflows you can apply to any type of project, corporate video, documentary, feature film, yes, even your cat's Youtube channel.

Your audience deserves to know what's important in every shot and they shouldn't be forced to mentally fix problems such as bad white balance, poor exposure, or mismatches between multiple cameras. We'll also explore how to move beyond merely correcting our images to enhancing them for mood, style and emotion. To get you started on your journey, I'm going to take time early on deconstructing the operating system and hardware that Resolve supports. You'll also learn the differences between the paid and free versions of Davinci Resolve to help you decide if you need to upgrade to the paid version and, yes, you can use either version with this training.

Then we're going to get up to speed on Resolve's interface in creating projects. I'll show you how to import footage, timelines, we'll cover the essentials of how to edit using Resolve 11's new editorial features. You'll learn it's primary tools and secondary tools and how these tools can be controlled using shapes and keys. You'll learn the bevy of tools inside of Resolve for helping you match shots, create multiple versions, group shots and then graid those groups. And if any of this sounds foreign to you, I've scattered colorist lingo movies throughout this training.

I'll explain concepts such as primary corrections, secondary corrections, vignettes, serial nodes and once we've got all of those concepts nailed down, we'll put those tools together and talk about creating looks using third party plugins, setting the mood, and controlling the viewers' eye. Scattered throughout this training are in action chapters where I take the concepts we've learned and apply them to a real life project, a music video for the band Minimus the Poet. We're going to pull together a hero shot's timeline which is a subset of shots from the overall music video and we'll apply these core Davinci Resolve concepts so you can see how a professional puts them into action.

By the end of this training, we'll have a fully colorgraided subset of hero shots that can be sent to our client or coworkers starting discussions of how the image should finally look. Does this sound like a lot? (laughs) Well it is. This is version 11 of Davinci Resolve. They've been adding tools and features for over a decade so we'll move slow. This training builds upon itself. It introduces new tools only after the concepts they're built upon are first taught to you.

Without further delay, let's dig into the essentials of Davinci Resolve 11. Thank you for joining me. I'm Patrick Inhofer. Happy graiding.