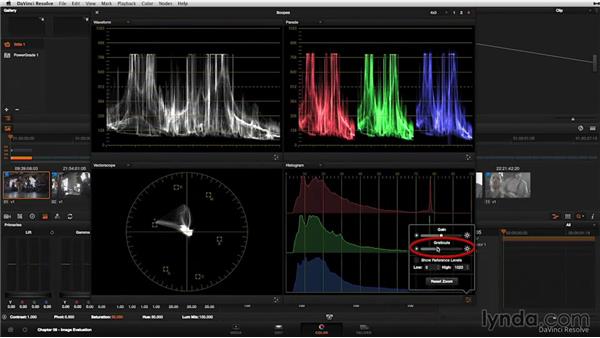 Hero shots are the important shots that will be the focal point of edits throughout the process. Using video scopes to analyze the hero shots is how you will detect the exposure levels and verify highlights. Any clipping will become apparent at this point, making for an easier editing process. When using DaVinci Resolve 11, these native tools make focusing on your hero shots a simpler overall task.

- We're back now with the music video that we conformed, and we've gone through and marked shots with blue flags which are now our hero shots, which we will do our initial analysis and color correction to. So, I'm gonna go ahead and enable sorting by flagged clip, and right now I'll just pick Any Flag because the only flags we have so far are these blue flagged clips. Now let's pull up our scopes and take a look and see what we can tell from these images as an initial analysis. Another way to bring up our scopes is to right click in the viewer and select Show Scopes.

And that's just what I've done. What I'm gonna do is I'm gonna make this fairly large, and I'm also gonna go to the four-up view. I'm gonna cover over the viewer because a great way of learning how to read scopes is to read them independently of the image you're looking at and then take a peek at the image and see if your evaluation makes sense. And on this initial shot... Yeah, I think what I want to do is take this RGB overlay and turn that into a Y only, a Luma only overlay.

As I look at this image, it's a fairly well-exposed image. I've got a lot of thick traces in here from the deepest shadows up until these brightest highlights. Now, you will notice, they did protect the highlights pretty well, and so I've got clipping going on, but they're dropped down from 100 percent so I'm gonna need to lift up this clipped images because these are highlights, these are bright highlights, and typically if these are point sources, which they are here, it's the windows here, so this is a source of lighting for us, and so I'm probably gonna want to bring this all the way up to close to 1023 simply because otherwise this would look kind of dull gray, all right.

Then as I look at the shadows, I can drop these down a little bit more. How far I drop them is kind of up to me, depends on where I want to set the shadows overall for this music video. As I look at the RGB balance, I don't see anything necessarily wrong in here. It's not looking particularly... I don't see one color channel seemingly out of balance with the other two color channels. Same thing on the vector scope, I've got a big yellow push here, and if I go ahead and the trace gets a little dim here, so I can come up to my vector scope options, I can kick up the trace.

Oh yeah, you can take a look at that now. And you can see I've got a big yellow push in here, I'm not quite sure, that might be from the guitar, could be from whatever is up here in this section of the window. I'm gonna have to take a closer look at that. As I saturate up the rest of this image, I'm gonna have to make sure that whatever this is, I may need to isolate it and control it. Let's take a look at that image. Yeah, that's what it is, it's the signage up here is almost certainly what it is. And I don't really use histograms since I was raised in a video tradition, which tends not to use them, but if I was, I can see that the exposure on this shot is exposed towards the left of the histogram suggesting a darker image, and the color channels, they seem generally balanced with each other.

And on any of these, I can also customize these scopes so that I can take the graticules, or "gra-ticules," if you want to be proper about it. I prefer gra-TIC-ule. I'm gonna drop down this so that they're a little less obvious. You know, I feel like doing this on all of these. Unfortunately, if you jump into a new user or database, these won't carry with it, and you've got to reset them all over again. All right, let's take a look at another shot. We'll go to the next shot. Again, very similar to the previous shot. Very wide exposure.

I've got lots of shadows, lots of highlights, lots of mid-tones, and some clipping going on. Color balance looks pretty good. I definitely want to drop the shadows. In terms of the saturation, yeah, looking like a decent starting point. I'm seeing color in here, it's not desaturated. So as I expand this contrast out, as I add some more saturation, I have quite a ways to go before I have to worry about illegality. Next shot. All right, so now we're getting to the section where we've got some shots that are lifted.

They're a little washed out. If I take a look at the image, yep, washed out. You can see it's probably coming in from this light source, but because it's a light source that's washing this out, and kind of almost like a lens flare type of thing going on, we'll have to decide, maybe this shot doesn't have all these blacks set all the way down to pure shadow. Maybe they stay somewhat lifted. It gives us a bit more of an ambient feel, a bit more of an emotional feel. I do have some clipping going on, so I'll have to take a look and maybe drop those levels a little bit, and see if there's detail that I might want to retrieve here.

And once again, there is some color information, not a lot, but there is color information there. Next shot. Same thing, very wide exposure. I've got this chopped off mountaintop, so I've got some clipping. I'll want to bring this close to 1023 simply so it doesn't look dull gray. I'll go forward a couple shots. This shot's kind of interesting. A little less narrow of an exposure range, but still very well balanced. The one thing I'm gonna say about these shots so far, let's go to the next shot, is they're very well balanced.

Color balance is very good on these. They weren't improperly exposed. Someone did their job on white balancing these cameras, but again, this is a very, very washed out shot. Let's take a look. Yeah, that's her. So we're gonna have to work on her somewhat and drop these black levels, give her a lot more contrast, and really pop her out of the screen. As I down arrow through the rest of these shots, I'm not seeing anything that jumps out at me so my initial evaluation is, looking at the scopes is very similar to my initial evaluation.

If I hide these, looking at the images, which is, they seem somewhat balanced, I've got some issues with shot matching going on here, for instance going from this shot to this shot, I'm gonna have to work so that these shots match each other. But otherwise, pretty well exposed. Blown out windows is something I'll have to deal with throughout, and I'll eventually maybe even make that part of the look of this particular music video, and have those blown out windows work to our advantage so that they don't look like a mistake and that they look intentional.