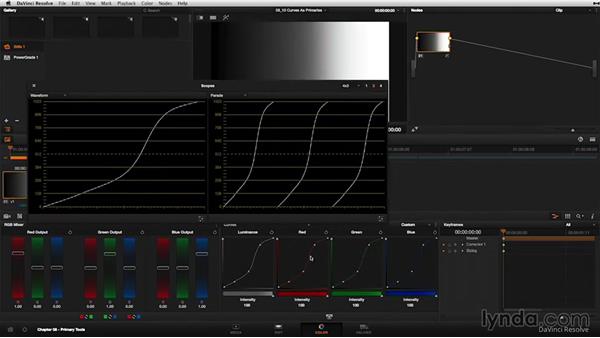 Curves are often considered secondary tools, but it's possible to use them as primary corrections in DaVinci Resolve 11. This online video will show you how. Click on a channel's curve and drag it along the graph to adjust it. Add additional points by clicking and dragging. Unselect "gang custom curve" to adjust only one color (or luma) channel at a time, or re-select it to snap all channels to the same curve. Use the Intensity control to reduce the effect of that curve.

- In this chapter, we spent a lot of time looking at the tools that exist here on this side of the interface, these, what are considered generally, primary tools. Now what we're going to do is take a look at this tool over here that's kind of segmented with the secondary controls but can be used as both a primary tool or a secondary and we're going to look at it as a primary, which is Curves, all right. Let's take a quick a look at this interface before we dig into this. Here in the Curves, I've got a Reset button as well as a Gang button.

I've got my Red, Green and Blue curves. I've got my Y-only curve. I've got two end points here. As you guessed, up on the upper right, that would be my highlights or my brights or my pure white. Down on the lower left are my shadows or my blacks or the darkest parts of my image. What I can do is add a point by clicking on the graph and move it up and down. I'm now changing the brightness of my image based on where I'm moving this.

By pressing cmd + shift + w or ctrl + shift + w, I can see my Scopes. We can see that on this gray scale, as I move this, it's mimicking it pretty darn well, right. As I add more point and I can continue to add additional points, right. What you're seeing me draw out here is pretty much what you're seeing here, okay. Now I can also uncheck Gang Custom Curve and now I can manipulate individual color channels and the luma channel without affecting all the other ones.

But once I re-gang them and I click on one, all the other color channels are going to snap to match. If I click on this Red point right here, watch what happens to the Green and Blue channels. They snap to conform, all right. So that's always something to be kept aware of. Now if I wanted to reduce the effect of one of these curves, I could come down here into this Intensity control. If I click and drag, now I'm backing off the effect of this curve. When I bring it to 50, it's the halfway point. If I bring it back the other way, it's an invert of what it was.

This is 100%, perfectly matched to what I did, and then I'll bring this back to 50 and it's essentially turning it off. You could see by looking at the Scopes, I've turned it off, all right. So you look at this and you say, "Wow, that's a really big honking correction, Patrick. "This must be a primary tool." The reason it tends to be thought of as a secondary tool... And I'm going to reset this. Is because we're actually making very detailed moves when we do something like this, right. We're making very detailed moves. Even though we're affecting the entire image, we don't have to.

I can put two control points, one control point here and one control point there, and then make a big move there. Now this is a very isolated move. So it tends not to be thought of as a primary tool. But if I don't put a lot of points on here and just grab the top end point here and drag it down, well, jeez, that's looking like a gain control. Precisely, that's exactly what's happening. It's acting as a gain control. If I click and drag on this point on the bottom left and lift up, it's acting like a lift control.

Then if I click anywhere in between them, it's acting just like a gamma control but with a little contrast pivot thrown in so I can control where precisely, unlike the gamma control, which is like this point. It's almost like right there. I can move this point up or down the curve if I want. In this case, I'm using Curves, which tend to be for more fine, detailed, precise work, as a very broad tool, and in that case, that's how you do use Curves as a primary tool.