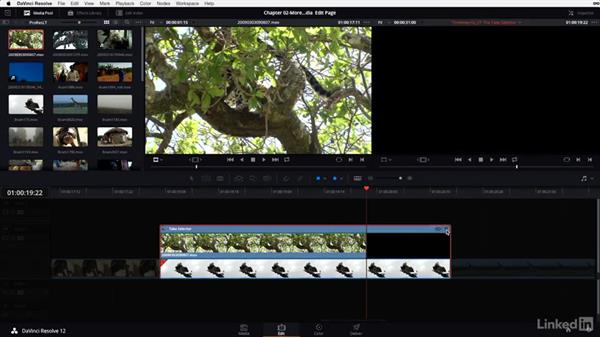 In this movie, author Patrick Inhofer will show you how to keep your timeline tidy by using DaVinci Resolve’s ‘Take Selector’ to manage alternate choices for a shot, and how to keep them neatly hidden. This can be especially useful if you work with Visual Effects artists who are delivering you multiple versions of the same shot.

- In our DaVinci Resolve 12 Essentials training, we took a good long look at the Edit Page, from the perspective of a colorist who needs to get some revisions done. In the process, we skipped over some of the more advanced features in the Edit Page, and so that's what we're gonna cover now. Some stuff that I think are really nifty, that you should really know about, and one of those, that I really like, is the Take Selector. Let's jump into the Edit Page, and see how it works. And if you have access to the exercise files, we are in timeline 02_01, the Take Selector in chapter two.

So here's the concept. We've got this little timeline we're putting together, and my client wants to change and look at an alternate shot, comparing these vultures to this giraffe. And there's a shot of a big cat that they wanna use. So I'm gonna go ahead and find our ProRes LT footage, and we've got two shots of the cat. There's this bright colorful one, where it's kind of camouflaged, and then there's this desaturated one, where he's nice and rested.

And the client has decided, you know what they like, the camouflaged version. Really shows it better in its environment. Now, traditionally how I might have done this, is just take this shot of a cat, drag him on to the V2, and then I could highlight the clip below it, press "D" to disable that clip, and now I've got this shot against the giraffe. I might do a little pullup here, but at least I have the ultimate take. Instead, in DaVinci Resolve, let's go ahead, activate that shot again with the "D" button, and then I'll do a pullup on this edit.

For instance, I put myself into trim mode. Press "T", Shift+right bracket, and pull up that shot. But I've got a better solution here with the Take Selector. I'll undo that last trim. I bring back the pointer, by pressing the "A" button, and I'll delete this clip here. Instead, I'm going to reenable the vultures, right-click on them, and select Take Selector. I'll enable it, and now we have a brand new little UI in here. Up+Command+Plus to zoom in, so we get a better look at this shot, and there are bunch of things going on here.

Number one, I've got this little orange badge in the upper-left hand corner. It's a little star, telling me that this is the active clip in this take. Of course, it's the only clip in this take. Above that is the close button. To the right, we've got this little ripple button, and a trash can, I'll show you what those do in one moment. So, in order to get a clip in here, on alternate take, let's go ahead and drag, from the media pool, right down onto the shot, and release, and now we've got an alternate clip.

Another approach, and let's delete that by keeping this highlighted, I'll click on it to make it highlighted. And, I'll press the trash can icon. Instead, I could just grab from the source viewer, and drag into here. Now notice what'll happen. I've got a black hole here, because these are two different lengths. If I were to go ahead, make this shot active, and close the Take Selector, what would happen? Well, you see it in the viewer, the viewer turned black. I would have a gap in this timeline. And that's not really what I wanna see, here in the Take Selector.

And now, you notice how I've got the cat, and then we're cutting straight to the giraffe, and there's some overlap here. The vulture shot is longer than the cat shot. If I were just to click on the vulture to make him active, notice how the timeline has jumped to the end of the vulture shot, because this, with the ripple enabled, if I were to close it down now, we'd take this entire clip. If I come back and decide, "Nah, I think I want to "use the cat instead.", the timeline will close up, fill the gap, in ripple mode.

Let's go ahead and turn off ripple mode. The other behavior is, I could select this longer clip, the vultures, click and drag, and now they're gonna live just inside the window of the cat shot. And that's what I think I wanna do. We were happy with the shorter length, we wanna use the vultures, and now I can retime the start of where the vultures begin. You see in the Record window, when I click and drag, to slip this shot, I can see where the first frame of the cheetah's are, or, my alternate take of the vultures.

I release, close this down. Finally, if it turns out that we're really happy with the vultures, but the shorter version of the vultures, well then, what I can do is right-click, and finalize this take. The badge goes away, and this acts just like any other clip in the timeline now, we no longer have any of these alternate shots. Some other reasons I use the Take Selector, is with visual effects. I use this all the time when I'm working with a visual effects team. I'll send them a graded backplate, then they'll send me back the visual effects, and rather than deleting out that backplate, I might wanna have instant access to it later in the process.

The producer might say, "Hey Patrick, "what did that originally look like?" I can very quickly use the Take Selector to go through the various iterations of a particular shot.