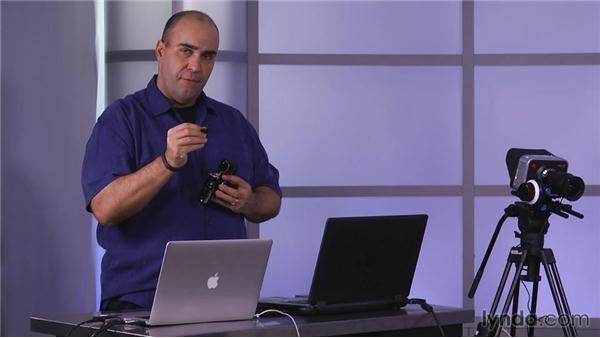 The Black Magic pocket cinema camera uses an SD card. But not just any SD card. It needs to be an SDXC or an SDHC card format. Now the HC format has been around for a while. And the XC format is a newer type of card format. But the thing is, is you're not using standard card format. Now, in order to get a card into the camera's pretty easy. I recommend you have some sort of card wallet, like the one I have here from Pelican. It's going to keep the cards nice and safe.Then, carefully remove the card from the card wallet.

Don't scratch the gold contacts on the other end. So it's generally a good idea, when you put the card in the card wallet, to make sure that those go down. And the little notch filter is easy to grab and remove the card. Once you have that you can go ahead and take a look at the camera itself. Now the awkward thing, with the cameras is that the center plate on the bottom where you mount the tripod plate, almost always covers up the battery compartment. So either you're going to find yourself taking this on and off a lot, or go with a type of plate like I've used here, that offsets the plate to the side.

It looks a little bit awkward but it makes it easy to access the compartment for both battery and memory card. Now this particular camera doesn't have a card in it, you could see the empty slot. Take the card with the gold contacts facing out and line it up gently with the hole, then press in. Gently downward, until it clicks into place. Once it's locked in, you know that it's in there and the card will stay put. To remove it, you simply push on the card again, pushing down gently until it removes and then you can grab it and take it out.

If you put the card in backwards, it won't go in. And do not push it in. It's designed only to go in one direction. So always face the gold contacts outward. Think of it this way. Just like you want to read the back of the screen, you want to be able to read the label on the card. See the words here? See the words here, line them up, push it in, and it's going to work pretty well. If you visit Black Magic's website, you'll find a list of officially recommended cards.

This list varies over time, and there are lots of different manufactures you'll find on this list. For example, you'll see that it lists Delkin, PNY, and Sandisk. However, I can tell you with absolutely certainty, that I've had absolutely zero problems using the RAW cards, the STEEL cards themselves from Hoodman. If you're going to be buying new cards I strongly recommend you stick with what's listed on the website. However, sometimes you may find yourself on location needing more storage, and you're going to run into your favorite big box retailer and try to get the fastest card you can find.

On the other hand maybe you already have some cards from other cameras. What you need is a card that's capable of doing 220 megabits a second. This is required if you want to capture to Apple ProRes. On the other hand, if you're going to be capturing raw, it is extremely beefy. There are very few cards listed that support raw and these are some of the most expensive cards. They tend to have the highest data rate and they will give you the ability to record a raw file. Now, when comes down to budgeting storage for cards.Keep in mind that a 64 GB card will hold about 37 minutes.

Instead of getting into crazy decimal points just take the card size and divide by two and know that you can safely record in ProRes that much material. Ron the other hand can vary a bit more wildly depending upon the subject matter and the record times are significantly shorter. Alright in order to get the cards ready to work with the camera you actually do need to do some special formatting and the thing is that this formatting needs to be done with the computer not the camera.