Understanding the Contrast and Pivot controls 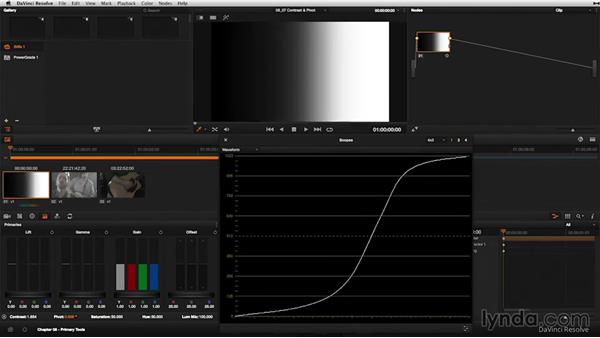 Learn the Contrast and Pivot controls in DaVinci Resolve 11 to adjust a video's contrast and underexposure. Da Vinci Resolve allows easy creation of gradations in contrast, via automated creation of S-curves. Pivot lets users select the pivot point for this S-curve, so that the S-curve moves around that steady point. The Pivot control will only change a video's contrast if the Contrast tool is in use and an S-curve has been created.

- As we continue to explore the primary controls we have in DaVinci Resolve 11, we can't overlook what is commonly overlooked, which are the contrasts and pivot controls. Now, here's the thing, pivot control's really the one that's mostly overlooked, because if I come in here and we're on our grayscale here in shot number one, and I'm just going to increase my contrast, you can see what's happening here. Alright, I've got contrast as being increased. I've got the brighter pixels in the image being lifted, the darker pixels in the image being darkened, and pure white and pure black are pinned to their ends of the grayscale.

Some interesting things to note about DaVinci Resolve's contrast control is, notice this nice, smooth transition here. In a lot of other apps what you're going to find is, it'll take white, put it over here, take black put it over here, and give you a very straight line. DaVinci Resolve doesn't do that. DaVinci Resolve does what's really... Colorists would look at this and call this an S-curve. So if you're coming from let's say Avid and you're used to drawing S-curves, you don't even need to draw an S-curve anymore, you can just come in here and I can double click this to reset.

And then again I'll click and hover over it and with one quick click, I've got my S-curve. It's a very subtle S-curve. Let's go ahead, add some more contrast and now let's figure out, what the heck does pivot do. Well, now that we have contrast applied, let's scrub to the right over the pivot control, and notice the effect it's having on the contrast curve. As I scrub to the left, the contrast curve is moving leftward. Now I'll make a big move on the contrast again, and this time watch to see where the center point is of our contrast adjustment.

Instead of pivoting around 512 the center point of the image, it's now pivoting, oh, just above the 128 range here. And let's shift it to the right again, and now let's pivot again, and notice where the pivot point is happening, way up at the top of the image. That's where the pivot point is happening. Now if I reset contrast and just adjust pivot, pivot doesn't seem to be doing anything right. I'm scrubbing it back and forth and nothing's happening. That's because pivot, effects the center point of contrast.

If you don't apply any contrast, you're not going to see the pivot point do anything. So pivot very much relies on the contrast and for contrast to actually be doing something, before pivot itself actually starts doing something. And again, notice every single pixel in this image, except for those pixels at pure white and pure black, are being affected by this contrast and pivot control. And if you have access to the exercise files, shots two and three I've selected for you to play around with the contrast and pivot controls.

One is overexposed, and the other is underexposed, and you should get a really nice feel for how to move the pivot in order to get the contrast to expand evenly for each of these two shots.