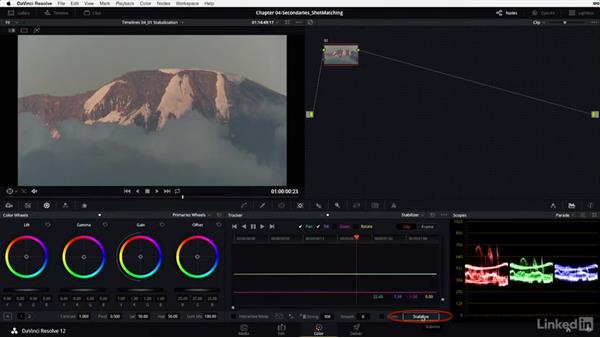 For the purposes of color correction and following objects as they move around the screen, Resolve’s Tracker is a terrifically fast and generally accurate tool. But what if instead of following an object around the screen we want to analyze the entire image to eliminate camera shake? That’s the job of the Stabilization tool, which is found with the Tracker. Learn how to find and use Resolve’s stabilizer.

- Imagine for a moment you're a software developer and you've created this awesome tracker so you can track objects as they move through the screen. And then you think to yourself, well if I can track an object bouncing around, if I reverse the track, and invert the track, instead of them bouncing around, they'll look like they're sitting in one place. In other words, they're stabilized and guess what? The hind side of DaVinci Resolve 12's tracker is the stabilizer.

Let's take a quick look in here. And if you're following along on the exercise files, we are on Timeline 04_01 Stabilization in chapter four. And I'm gonna jump into the tracker, and guess what? Right here is a pulldown window that says Window. Well what that means is it's tying what's happening in here to whatever window is active in this menu in the Window menu. Well what we can do is select this pulldown and switch it to the Stabilizer. Once we switch it to the Stabilizer, we can no longer track a Window in this node.

We have to do it in another node if we want to track a window. So we've now committed this node to stabilization, and I've got the shot here. Let's get rid of our clip so we can get a better look at it. I'll play. And you can see it's a locked off shot of a mountain, but it's not quite as locked off as we might like. It's kinda bouncing around a little bit. And our producer says, "You know what? "Let's really just, I want that to be rock solid." No problem. Let's go to first frame. I've got the Stabilizer selected, and now we've got a variety of parameters that we can enable or disable here, and just for the heck of it, let's turn off Rotation and turn off Zoom.

I mean, we're definitely not doing a zoom. And we're probably not dealing with rotation. We'll just do Pan and Tilt. That's all we're dealing with. I'm gonna go ahead now and press play. You can see as it stabilizes all the tracking points it adds, and now in order for it to stabilize, if I hit play, it hasn't done anything yet, in order for it to stabilize, I need to press the Stabilize button. Now once I've done that, let's Shift + F and take a look at our image.

You can see that's done (laughs) a really good job of stabilizing our image, but you can also see we're getting these black bars. In other words, it had to adjust our image by pulling down and to the left on the image frame by frame in order to keep the center of the image looking like it's locked off. Let's stop that, Shift + F. To get rid of that little black edge, we need to zoom the image. I'll select Zoom down here.

Repress Stabilize. Now let's take a look at the image. And we've got some stabilization going on. That's really, really stable right now. There is, you notice a slight rotation going on. Notice that the loop point, right here you can see there was a slight rotation. If the client notices the rotation, no problem. Well just reanalyze. I'll go to first frame. Enable Rotation. Retrack.

Zoom is still selected. Stabilize. Now let's see what happens on the loop point. A little better, ah maybe about the same. Sometimes it works, sometimes it doesn't. But this is a heck of a lot more stable than what we started with, and if I want to bounce it out, let's say I think, well you know what, Patrick? We probably did too much stabilization there. Well we can use the Strong control here to back off that stabilization. So let's bring it back to 47.

Re-click Stabilize. It gets a little bit smaller 'cause it's not doing as much stabilization, it doesn't have to zoom in as much to get rid of those black bars. Hit play. And so now we have a little bit more of an organic shot. Maybe we went too far. So we'll split the difference, bring it to 75. There we go, so we have a nice, natural move without the whole thing feeling like it's jumbling around on us. So not only can we stabilize, but we can tweak the amount of stabilization using the Strong control.