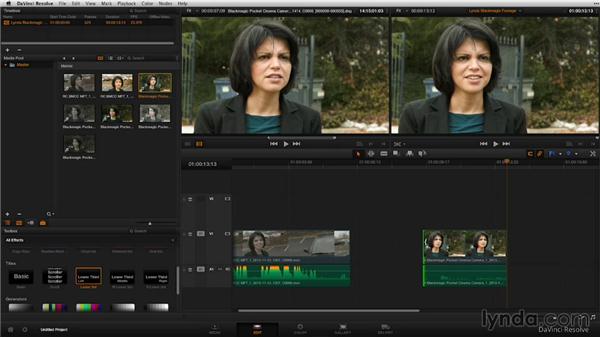 Now as I've mentioned, there are two main workflows with Resolve. You can import individual shots, and you can color-correct those shots and render them out. Most people are going to probably be in a round-trip workflow with an edit application like Premier, Avid, or Final Cut Pro, but the team at Da Vinci and Black Magic have worked really hard over the past couple versions to improve the editorial capabilities of Resolve. Now I want to be clear, that Resolve is not an editor. It's never going to be a replacement for those high-end editorial tools, but I do want to show you, really quickly, that you can do some editing and some basic compositing, things of that nature inside of Resolve.

So, if you download the free version of Resolve, Resolve Light, and you don't have an editorial tool like Premier Pro, The Avid, or Final Cut Pro, you can do some basic editing directly in the project and inside of the application itself. So, here I'm on the edit tab of Da Vinci Resolve, and I previously created a sequence called Lynda Black Magic footage, and you can see all my shots are here on the sequence. Now, if I didn't want to do that, let's just say I want to go ahead and delete all these shots because, previously added in there. I could come in and select a shot, just double click on it, to load it into this window, and just like in a regular editorial application, I can come in here and scrub through the shot, and I can do things like mark an in with the i key, and then come over here, mark an out with the o key, and then simply drag that down to my timeline, and there you can see I have the shot on the timeline.

I can repeat that process, of course. I can come in to maybe this shot, and let's find a different in and out point. There she is. We'll back up a little bit. Just using my arrow keys on my keyboard, I'll mark an in, and I'll go ahead and mark an out down here. Just like that, and I'll bring that down to the timeline once again. Now, of course I can place this on a higher video track, if I prefer to do kind of an A or B role. Now we're simply going to place these all down on the same video track like that, then I'm simply going to zoom in to my timeline here a little bit so I can see the split between them.

Now, there are the two shots, shot number one and shot number two. By default with my selection tool, this guy, normal edit mode, if I come over the edit point of a shot, you'll notice depending on which side, or kind of how I position my cursor, I'm either on the out point of the first shot, the in point of the second shot, or right here I'm kind of affecting both the in point and the out point of both shots. So, let's start with this side. I can just do a basic trim to make to make this shot a little shorter. Like that, and you'll notice I'm left with a gap.

Let me do it the other way, I'll go on this side of the edit and trim and you'll notice I'm also left with a gap. This is a basic trim that you can do in editorial application and now you can do it very easily inside of Resolve. If you go in between the two shots just like so, you'll get a roll mode, and this is where you can kind of roll the edit point, keeping the overall duration of your sequence the same, but allowing you to trim or sort of adjust where those two clips meet. The other thing is if you come into this tool right here, Trim Edit Mode, you now have those same tools, but in the dedicated tool, instead of just the selection tool, you can also come in with the Razor Blade tool and come in and cut up your shot if you want into constituent clips.

Some people like to do edits that way as well. Now, besides doing basic edits that we can do on the timeline, and be able to see our edits over here on the right-hand side and see our source over here on the left-hand side. We can also do simple things like transitions and titles inside of the Resolve timeline now. So for example, if I wanted to take a cross resolve I could simply drag that cross resolve to the middle of the transition of these two clips. Let me go ahead and play that back, back it up a little bit. Play it through that. And there, you see, I have a cross resolve. Titles are the same way.

Titles are a new feature inside of Resolve 10. Let's say I want to do a lower third title on this shot right here. I'll simply take my lower third title and drag it up to video track two just like that, and if I want I can go back to my trim tools here, and just trim that back, come on computer, there we go. And Shift+Z, zoom your timeline back into a single view, and I can trim that how I want, and there is the title right there. If I double click on the title with my Selection tool, now I get into an inspector.

Where I can say hey, this is Mary Smith, right, and she is a reporter. There you go, and I can adjust obviously the formatting, and the look and feel of this text. So I think you can see, it's pretty easy to add an edit, to trim a clip, to add a transition or even add a title, but there's more we can actually do here inside of Resolve with editorial tools. We can do things like adjust speed, or change the composite mode between two clips. It's actually a pretty rich and deep feature set when it comes to editorial.

Now this is also a big deal, because in previous versions of Resolve and indeed, in dedicated color correction applications altogether, editorial tools like this, were nowhere to be found. It used to be that you had to go back and ask an editor, or a compositor, or a motion graphics person for a fix or an update, but now it's really nice, that we can do all of those things, for the most part, inside of Resolve without having to depend on other team members. Up next, we're going to actually start doing some color correction, taking a look at working with Log and RAW footage.