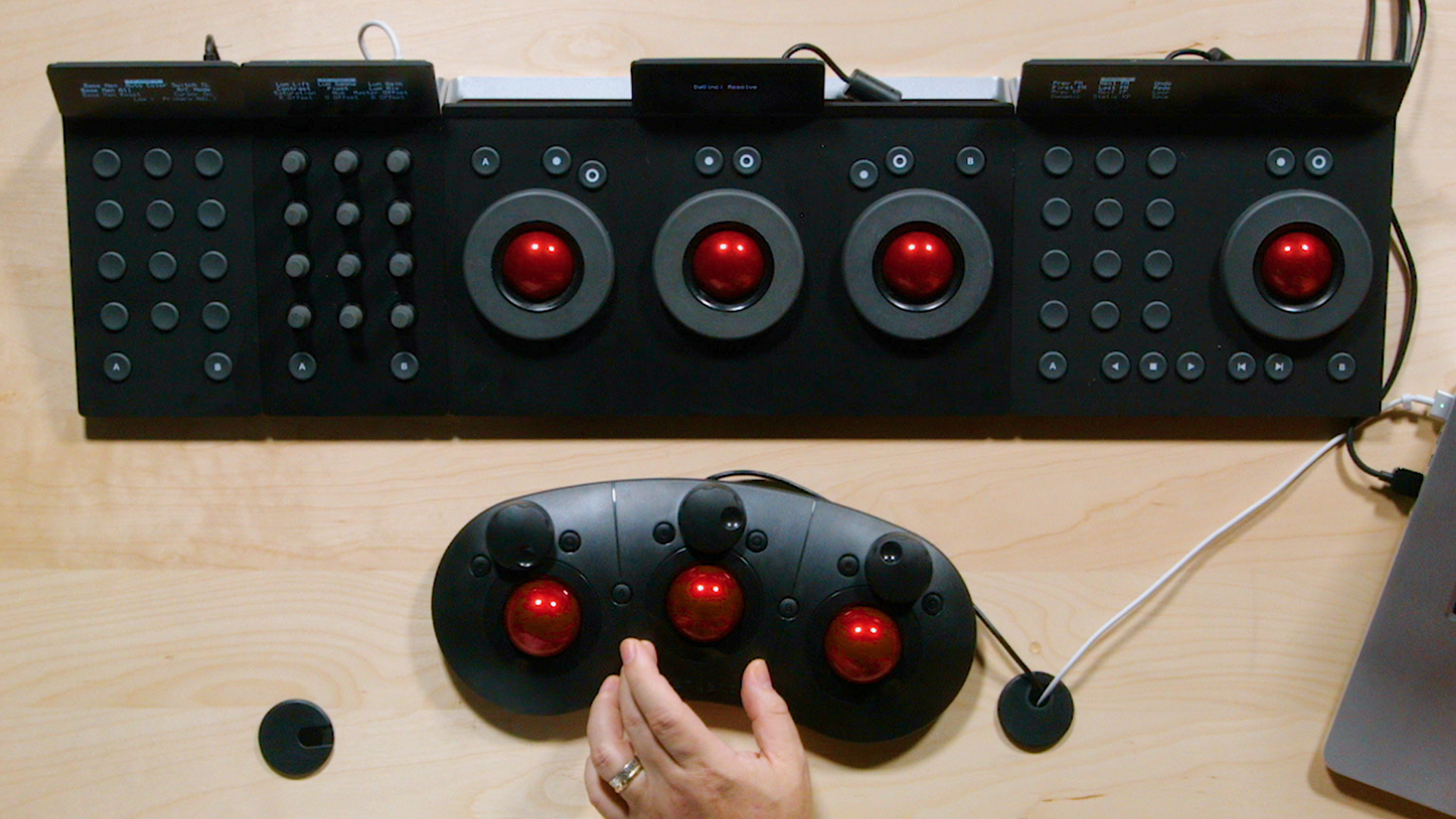 - Pat, when you start to think about building a DaVinci Resolve system, you're inundated very quickly with a lot of technology technobabble, as I like to call it, right? Things in gigahertz and gigabytes and all sorts of other technical terms, and what we want to do in this chapter is break down some of the key components that go into building a system, and that's particularly important if you're building your own system and choosing the parts, but it's also important if you're choosing a turnkey solution, you need to know kind of what all these parts do and what role they play in a DaVinci Resolve system.

- That's true. What you want to do is initially, what everyone's going to focus on initially when selecting a computer is your processor, and when you select your CPU or your processor, you're also going to be forced to select how much RAM you're going to put into your system. When it comes to DaVinci Resolve, personally, I'm not, I don't care about this stuff, I don't, it drives me insane. It's always changing, they use stupid naming systems that keep me completely in the dark, so if I am just starting out in DaVinci Resolve, I'm not sure that I'm going to build a dedicated Resolve only system, what am I looking for when it comes to choosing a processor? - Well, let's start there.

As a general rule of thumb, faster, bigger, better is always going to be the wise choice, right? Faster processors are going to give you more faster performance. But the easy way to think about processors these days is that there's really two classes. There's sort of the enthusiast processor, and you'll see those labeled from Intel as i5, i7, things of that nature. They're relatively affordable. They usually carry very high clock speeds, 3, 3.5 GHz, even 4 GHz plus, very fast.

But then you also have workstation class processors, what Intel brands as their Xeon class of processors. For a professional workstation, this is often a balance act. The enthusiast processors are going to often be higher clock speeds, but they're not going to offer the same amount of processing cores, and we'll get into that bit in just one second. - So it's not just about faster clock speeds. - It's not. - Those wars have ended, pretty much, haven't they? Like the 3.5 GHz versus the 3.7 GHz? - Yeah, to a certain degree. - OK.

- There's still a certain class of people, like gamers, for example, that are always looking to do things like overclock their processors. Really, you can't do that with a workstation processor, you're going to need to go to an enthusiast processor to do those kind of overclocking and kind of tweaks. Pat, that brings to mind a couple other key differences between the enthusiast processor and the workstation class processors. The first is going to be the number of cores that the processor supports. For example, in my main workstation, I have two 12 core processors.

Think of a core as almost like a sort of separate virtual chip, the more cores that you have on a processor, the more things you're going to be able to do simultaneously when it comes to processors. - [Pat] Kind of like having more than one computer inside the computer, right? If I buy an eight core system, it's literally like having twice as many computers as having a four core system. - Right, and on enthusiast processors, you're typically going to find two cores, four cores, maybe a couple more, but on workstation class processors, like the Xeons, you're going to find eight core, 12 core, even 14 and 16 cores, and those cores keep adding.

So when it comes to pure processing power, even though the clock speeds of the enthusiast processors may, and often times are higher. Well, often times, the Xeon or the workstation choice is a better choice to make because of the pure processing power. - Does the software have to be written to access those extra cores in a more of a workstation? - Sure, but any modern piece of software that's used for media creation, including DaVinci Resolve, tend to take advantage of those cores. The other thing to keep in mind about enthusiast versus sort of workstation level processors is the amount of PCI lanes that the processor can address.

Most likely, on the workstation processor, you're going to get more addressable PCI lanes, which is important for adding multiple cards into your system, GPUs, things of that nature. - Because you might have four slots in a machine, but those four slots might only share one lane. - Correct. - On an enthusiast machine, but on a workstation, each slot might have its own dedicated lane, meaning it can take the full bandwidth of that lane. - Well, it's actually multiple lanes. You'll see slots labeled, like 16x lane, or 8x lane, that kind of stuff, but in general, you're right, is that you get into a lot more lane sharing when the processor can't support all that.

The final thing that I think that really separates the idea of sort of enthusiast versus workstation processor is that you can do dual processor or even more configurations on workstation class chips. As I mentioned, I have two 12 core processors in my machine, and obviously, when you have more cores and more processors, the more overall performance you're going to have. Now, one more thing about processors, is just keep in mind with mobile solutions, laptops, all in ones, generally speaking, for energy, as well as heat requirements, those chips are going to scale down, no matter if they're a workstation processor or they're an enthusiast processor just because you can't have that much heat and energy going on in a mobile solution.

- In fact, on the MacBook Pros, there's actually, in the Energy Saver panel, there's a checkbox that you have to disable when you're running DaVinci Resolve because the OS is going to try to throttle down and save energy, and you want to override that and say, "No, "I want this processor working "at maximum speed all the time," so that when you're in Resolve it doesn't throttle down and suddenly Resolve starts acting very wonky on you. - That's right. Now, Pat, the other thing I see a lot of people skimping on after they've made their processor decision is system RAM, right? - Yeah.

- System RAM is something that you don't want to skimp on. - No. It has a huge effect on your performance, it allows you to pull up multiple apps at once, so if you do run your mail program in the background of your Resolve while you're color grading, at least you're not going to run out of RAM and Resolve is going to start acting wonky on you. Now, I know that Mac and Windows share the same minimum in recommended RAM. - Yeah, it's eight GB minimum, Blackmagic sort of recommends that you have 16 GB.

On Linux, it's obviously a little heftier, the sort of minimum level is about 16 GB, so they recommend 32 GB. But you know what? That's really not good enough. Because here's the thing about RAM and especially with modern processors. You don't want to starve your processors. The way that a lot of applications work and the way that your processors and RAM work together is that data flows from one piece of equipment, the RAM, to the processor and back and forth, right? I like to say don't starve your processors, and here's a good general rule of thumb, is that you want to have about two to four GB of RAM per physical processing core.

For example, if I had a 12 core Xeon processor, I'd probably want about 48 gigs of ram, that gives me about two gigs per core. But I wanted to be a little bit more kind of robust about it, having something like 96 gigs or 128 gigs, which seems like a crazy amount, that's going to give about four gigs or more to those processing cores. As a general rule of thumb, Pat, the more RAM that you can put into the machine, the better. I've never seen RAM be a stupid choice when it comes to configuring a system.

One last thing to consider when it comes to RAM is matching the RAM to your actual motherboard into your system. Many workstation class motherboards that use Xeon processors can also accept ECC RAM, which is error correcting RAM. Many enthusiast level motherboards that use those enthusiast chips, they cannot use that error correcting RAM, so you just want to make sure that your RAM matches your motherboard and the CPU that you're going to decide to use in the system. - Now, when it comes to dealing with hardware, picking your processor's very important, matching your RAM, getting the right amount of RAM, very important.