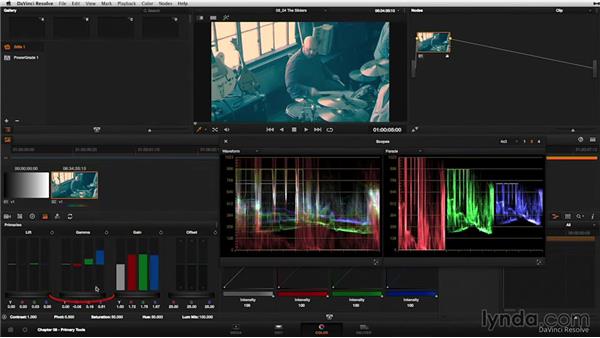 Adjusting the primary sliders in DaVinci Resolve 11 will fine-tune a video's color in ways that may be easier, or more complicated, than adjusting the color wheel. In this online video, learn how to use sliders to control individual color channels for the video's lift, gamma, gain, and offset. Adjust the green channel for a profound effect on red and blue channels, and adjust the contrast wheel underneath the primary sliders to affect all sliders at once and maintain color relationships.

- We've been exploring the color wheels here in Resolve, and there's a flip side to the color wheels and these are the primary sliders. And the first thing I want to point at is the direct relationship between lift, gamma, gain, and offset, and the sliders. Notice I switch to these sliders and they're named precisely the same, lift, gamma, gain, and offset. So if I take the gain, and I'm just going to take this and push red all the way up, right? Let's take a look at the color wheel, and look what's happened, it's pushed red all the way up.

If I take this color wheel and push it, okay all the way to magenta here, that works for me. Let's click on the slider, and these are the moves you'd have to make to the individual RGB channels to create this one move I did here. So the primary sliders give us individual controls to individual color channels. I can take and just add more or less blue, and the end result is moving this from here, over to here. If I very precisely want to raise my green lift, what I can do is come over to my lift channel, and raise my green.

And the way the image processing works here in DaVinci Resolve, what you'll find is, the green channel tends to have a pretty big effect on the red and blue channels. It takes a little bit of getting used to, but can often be used to your advantage. In other words, sometimes you can do in one move what would otherwise take two or three clicks to do, because of this relationship. And then if I wanted to go ahead and raise the green in the gain, I could go ahead and do that to help balance out the color channels, and then come in here and raise the blue gain.

Right, so I've got these very precise controls. I can also control them as a group. So for instance if on this shot I take this green gamma and push it and then pull back the red gamma and let's lift up the blue gamma quite a bit. Alright, now let's say I'm happy with that but overall I want to drop all of these color channels together, I can come down to my contrast wheel, and I'll pull to the left, click and drag to the left, in order to darken the gamma, pull down my gamma, and notice it's maintaining the relationship of the red, green, and blue channels.

If I bring this back to default, I've got my red, green, and blue channels, and that initial relationship has been maintained. The other thing to keep in mind is as I'm moving red, green, and blue, we've got a fourth slider here. We don't have any kind of fourth slider control in here. There's nothing in here. We've got the contrast ring, we've got the color wheel. What the heck is this? And let's go ahead, let's reset our lift, and let's switch over to the color wheels. Let's make a big move in the lift channel. And I made a big move but notice I haven't moved this fourth slider, but if I grab my contrast control, that fourth slider is moving, and that's called the Y-only or luma control.

That's because this control works on a very specific component of the video signal, and that video component is called luma. The luma control has an effect on the objects in our images, which changes our perceived brightness of it. And we're going to talk specifically about this Y-only or luma-only control and how it differs from the master wheel YRGB control in the movie on Y-only versus YRGB. But I just want you to understand that these sliders, are a way to do very specific moves that are very difficult to do within the color wheels.

If all I wanted to do was pull the green channel down, but nothing else about my gains, that's really tough to do here in the color wheels. It's very difficult for me to make a change without also effecting my red and blue channels. But I can do that by switching over to the slider, and now I can make a very, very specific correction within a much broader tool, which is our lift, gamma, gain controls, which are again big, honking primaries.