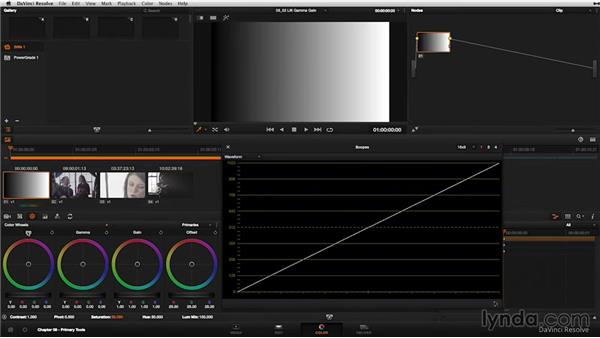 Primary corrections are made in Da Vinci Resolve by accessing the Color Correction Toolkit. In this video tutorial, you will take a deep dive into the Primary Color Wheels to understand Lift, Gamma, and Gain. You will see an example of how adjusting each one and the resulting interaction between them affects the color of your shots.

I also have a little pull-down menu here for reset, this is a global reset. It will reset everything here in the primary color wheels. Next to each of the total range controls, we've got a counterclockwise pointing arrow, that's our reset. If I come in here and pull my color balance control up towards red and want to reset that move, I just click here and it resets it back to default just for this control. And yes, this is our color balance indicator. So this shows us if the control is doing anything and if so, what it's doing.

So if I take this color balance indicator, click on it, and drag, as I drag in the direction of blue it's adding more blue. Now what we have going on around here is the color wheel. This is the classic view of the traditional color wheel, and it's broken up into three total ranges or brightness ranges. When I say total range what I really mean is a range of brightness between zero, being pure black, to 100, being pure white. This total range has its influence mostly in the brighter parts of our image.

Down here on the lift this has its influence mostly in the darker parts of the image. And in the middle, our gamma, which as you probably guessed, has most of its influence in the middle part of the image. So when we talk total range we're talking shadows, midtones, highlights; lift, gamma, gain. Now as I make a correction, let's say towards green, I've got these little readouts here for red, green, and blue, RGB. Now if I pull more towards green notice I'm removing red, the default here is for one.

So I'm removing red, adding green, and removing blue. Now let's pull this up towards red, watch the readouts change. Now I've got red above one, green is dipping blow one, and blue is way below one. Let me reset. Now in DaVinci Resolve land, these knobs here are called "master wheels". Think of them as contrast adjustments, exposure adjustments. And there's one limited to each of the tonal ranges. So if take this, and click and drag to the right, I'm making the image brighter but mostly affecting the whites.

I make a huge huge correction and I still have blacks in here because it's largely affecting this tonal range. Now what's really useful, especially working with grayscales, isn't so much looking at them visually. Let's pull up our scope. So I'm going to press, mac = shift + cmd + w win = shift + ctrl + w I'll flip us up to the one up view, and now we're just looking at the waveform. Pull up the waveform if you need to. This waveform is showing us we've got a nice, even, grayscale ramp from pure black down at zero bits, up to pure white at 1023 bits.

Now watch what happens when I adjust my master wheel. Move it to the right, and notice how on the right-hand side of waveform the brightest parts of the image are getting brighter and brighter, but also notice down here at zero bits, it's locked down there. If I go in the other direction, notice at zero bits, it's just pivoting around zero. So what this means is the pixels in the image that have the most affect by the gain control, are the brightest parts of the image. As we get darker and darker, and move further and further away from pure white, until we get down to zero black.

You have less and less impact with the gain control. But notice it is affecting every single pixel in this image except for pure black. It's just as we get down here, it affects it less and less. By the same token, if I go the other direction and come to the lift control. Watch how it pivots around 1023. So the brightest parts of the image stay locked. The pure whites stay locked. While it's the darkest parts of the image that have the most affect on the lift control.

And yet even has a make a really big move notice, zero black stays zero, 1023 white stays 1023. So it's having a huge affect on every single pixel in this image except pure white and pure black. Now, why would that pivot point be there in the middle? Let me reset this. What happens is, we perceive middle-gray to be in this range down here, and so that's where our gamma control puts it, in this range down here. Because if you're a cinematographer on set, and you expose from middle-gray.

This is what looks like middle-gray to you, and so this is where we want this control to be. So that's why it has that effect. Which means that if you're trying to affect a portion of the image that you can tell lives up here. Gamma might be a good way of getting at it. Gain might be an even better way of getting at it! On the other side if you're trying to affect a part of the image down here. Your first thought might be, "Well the lift is what is going to control "that part of the image." But it may turn out, the gamma control is better suited to make that particular adjustment.

So these three controls; lift, gamma, gain. Often interact with one another. You make an adjustment with one, you have to kind of make a counter-adjustment in another. For instance, let's come up here into shot number two, and I'm going to take my gain to brighten this up. Because this is kind of dull, right? This is really low down here, but it's the blown out windows here. Those are a point source of light, they seem to be our primary light source. So they really should be way up here around 1023. So I'm going to take that gain to lift them up, and watch how, let's see if it has any affect on our shadows.

And as I do you can see that the shadows are slightly being affected. So now I'll have to come back to the lift and drop them down slightly just to put them back where they were. Or, I can come down and drop them all the way down to pure zero. Then after I do that, well then I have to take a look at the gamma and decide well, maybe I have to adjust that one way or the other to get the precise look that I want to get at. So if I want to brighten them up, again look at the shadows. Now I got to drop the shadow a little bit more. So this kind of interplay back and forth between these tools is very common.

It can be a little bit frustrating for mouse users, it slows you down if you are on a mouse. That's why full time colorists prefer their control surfaces that allow them to use both hands, manipulating two or three of these items simultaneously against each other. Increasing their efficiency, and the number of shots they can work on in a given day. The other point I want you to walk away at the end of this movie with is, notice how these are what I call "Big, Honking" primary tools, Right? They affect every part of the image.

When you are working here in the lift, gamma, gain tools. There is literally no part of the image that is unaffected except; on these outside tools, where maybe on the gain, pure white stays where it is, and on lift, pure black stays where it is. Otherwise, any one of these tools is absolutely affecting every single pixel in this image and that's what makes them a primary tool. If you are following along with the exercise files, go ahead and play with these last two shots I put in this timeline to get some practice with these tools.

Because in color correction it's all about putting in the time.