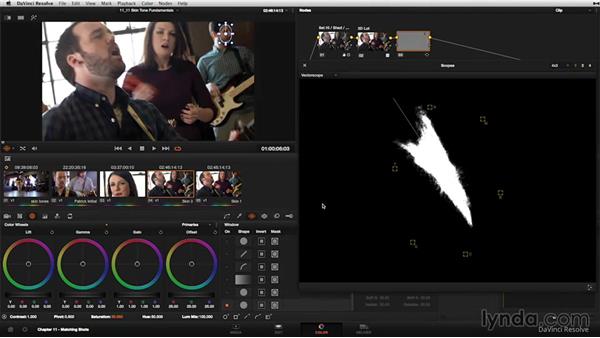 By virtue of how the human eye works, one of the most obvious shot mismatches is skin tones. The fundamentals in DaVinci Resolve 11 of skin tone adjustment focus on use of the vector scope. Select Show Skin Tone Indicator to create a line on the vector scope, along with which human skin tones will generally fall. Learn to create power windows around individuals' skin, and see these on the vector scope in this online tutorial.

- Skin tone, it doesn't matter what else matches between two shots. If skin tones aren't matching, the shots don't match. That's because as human beings, we are visually attuned to skin tones, we have this heightened awareness of them. So what does good skin tone look like? That is a fantastic question, glad I asked it and you know what? There is no easy answer. Skin tones vary considerably between races, within individuals within the same race and the latitudes where they live.

And then you get that actor wearing spray on sun tan, and he's got a skin tone all his own. That said, we can predict where skin tones exist and it's fairly easy to see on, yes, the Vectorscope. Let me call up our scopes, and I'm set up here for the two up, and I'm going to switch over here to the Vectorscope, I'm going to make some adjustments to this display. The first thing I'm going to do is I'm going to turn off the Graticule so we can get a better look at what's happening in our Trace. I'm also going to brighten up our Trace, make it a little too bright for the purposes of this demonstration, and notice there's an option here to Show Skin Tone Indicator.

Let's go ahead and turn that on. And what the heck is this Show Skin Tone Indicator? Well, it turns out that this line has engineering purposes, but for a working colorist, it also happens to be about where skin tones tend to fall. In other words, on this line you can expect human skin tones to be somewhere around this line, in a bit of a cloud. If you were to plot hundreds of different skin tones here on the Vectorscope, you would find that you'd get a cloud wrapping around this line in kind of a oval shape.

Within that oval is where you'll find different skin tones. You'll have people with different saturations of skin tone, some people will have very pale skin, other people will have very brightly saturated skin, some people will have little reddish tones, others a little more yellow tones, but what you won't find are people with a lot of blue tones, right? Skin tones, human skin tones tend to fall within this range in here and I just pulled up this three shot here because we've got three people, well in view, lots of skin to look at and let's examine the skin tone here, let's see what's going on and one great tip I have for looking at skin tone and isolating skin tone and looking at it on the Vectorscope, is to use, yes, a Power Window.

So I've set up a Power Window here, in fact, I've set up a bunch of Power Windows. If we take a look, I'll right click on Shot 4, I've set up four different versions, and I'm going to cycle through these but first I'm going shift+h, and look what happened. Shift+h, we're in highlight mode, which is only showing us our keys and our shapes and, so now I've got this window showing me only arrant skin tone here, and I could take a look and see where that's plotted here on the Vectorscope, and the next thing I'm going to do is because it's a little like, it's somewhat desaturated, there isn't a lot of color in here.

To make this easier to see, I am going to come up to our Vectorscope and Show 2X Zoom so it's a two times zoom, so we're zoomed into this twice as tight as we would be normally just to get us a nice clean look at that Trace. Now what I'm going to do is toggle through my various versions so we can take a look at different people's skin tones, and that would be cmd+n, to go to the next version or cmd+b to go to a previous version. So I'm going to cmd+n and watch the Vectorscope, that's our backup singer.

I'm going to hide the Window for a moment so we can evaluate this image. There isn't a lot of color in here right now. Their skin tones to me look relatively desaturated, they don't look very lively. And if I come back here to Node #1, I can see that I haven't done anything to saturation. I've done a lot of work to kind of firm up this image, turn it off, turn it back on. I've added a lot of contrast but not a lot of saturation and that's one of the reasons we're not seeing a huge amount of variation in here. Now one of the first things you might think to do, is I'll opt+s, and well, maybe let's go ahead and push color into this to give them some more skin tone and the problem with that is, you're starting to push color into a huge tonal range here.

The Gammas here, remember, overlap Lift and Gain pretty completely. Even if I just did it here in the highlights, it still has a huge impact on the Gamma, on the midtones and even into the shadows. What I really want to do first, before I start pushing color into here and start making my image almost monochromatic, is to see how much color do I have in this image. So let me go ahead, Delete Node #4, come into Node #1, and let's see what happens when we kick up our Saturation.

Now I'm not looking at my scopes, I'm looking at the image. I'm looking to see how much color is too much, and then I'll back it off. And I'm really looking at their skin tones, I'm not even paying attention like, if I pay attention to this red thing here, it's going to cause me to have a rather desaturated image, because this saturates up so quickly. I'm going to do just enough skin tone, right around there, it gives me some skin tone, and now of course, this change, hasn't rippled through to all my different versions. So what I've done is, I've gone here on shot #5, duplicated all the versions here and done a Saturation on Node #1, you can see what my number is right there.

So now, let's go to Node #3, make that active so I can go up to highlight mode, so now I'm going to cycle through my versions, which all had that extra saturation applied and see what we're seeing on the Vectorscope. Seeing a little bit more of variation now, Aaron himself is pushing a little towards red, our backup singer is a little more centered on our skin tone indicator, and then our third band member, it looks like he's pushing more towards yellow, if I shift+h, take a look at the actual band members themselves, the bass player, part of the reason why he may be a little bit more yellow is in the fact is that he's got a different lighting source and that's one of the things to pay attention to when you're color correcting.

The color of the lights will affect the color of skin tones. You can't isolate the two from each other. So skin tone has to look good within the context of the overall lighting which is a bit of a mind trip and takes a little while of getting used to, but then again, that's the whole point of balancing out these shots before applying the look. I want to get nice skin tones so that when I apply the look over an entire image, that the skin tones then react appropriately with the rest of the image. It's really hard to control your skin tones after you've applied a heavy look to it.

So now that we've seen a little bit of the variability right here, just among three Caucasians in Washington DC, doing a music video, you can imagine what kind of variability we'll get from people of different races, different walks of life and different countries, all coming together in a documentary, in a feature film, in a corporate video, how much variability in skin tone you're actually going to get. And the second point I want to make is, don't force everyone to the middle line. We can of course come in here, do a key on Aaron and force him to match the skin tone of the bass player, but why would we do that? Why would we want to lose the variability of human complexion? We don't, we don't want everyone to look exactly, precisely the same because humans are variable.

And with all of this as a preamble, now we're ready to delve into looking at how to take someone and match their skin tones between two different shots.