Introduction to the Blackmagic Ultrascope 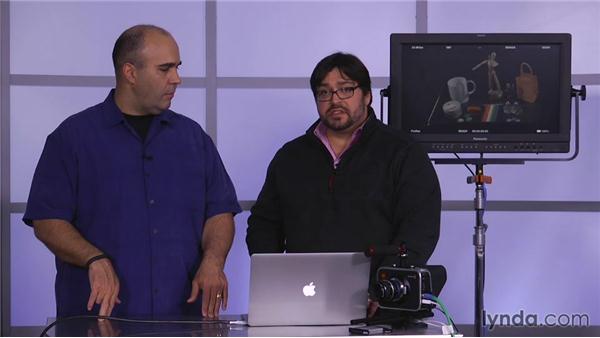 I've invited a guest expert on set. This is Robbie Carmen. >> Hey there, Rich. >> Thanks. And Rob is a friend of mine who also shares the DSLR Video Tip series here on lynda.com. So we regularly explore video production and post-production techniques. And he's one of the foremost experts of Black Magic that I know. Rob, we're doing something cool here. We're taking the camera, and we're turning it into a piece of other equipment, right? It's not just a camera anymore. >> Yeah. Of course, I mean, the Black Magic cinema camera has gained a lot of notoriety for its raw recording. Its ProRes recording, it's beautiful, you know, filmic looking image, but to accomplish that, you kind of have to know what's going on with the signal.

And Blackmagic provides with certain models of the camera, like the, the Blackmagic cinema camera, and production camera, not available with the pocket camera. They also provides Blackmagic Ultrascope, which is a set of analysis tools for the video and audio. >> And this Ultrascope was previously available and Black Magic is known for capture hardware and monitoring hardware that's used in studios and post production, so this was a natural fit. >> Yeah and you can still buy those options, there's 2 actually sort of standard models of Ultrascope, it's the Black Magic Ultrascope which is a PCI card you can put in a computer and feed a signal into, and then there is also the Pocket UltraScope which if you have a laptop and didn't want to be eliminated by say, a camera interface, you could plug into any other signal going on into the field.

Blackmagic UltraScope, and you have a full set of scopes. And the beauty about this in my opinion, is that sure you're going to have scopes in other places, you might have scopes on a, on a field monitor like this. >> Right. I could bring that up real quick if we hit button number 2, but. >> Yep, see the waveform right there. >> But we only have a waveform monitor. >> Absolutely. Ultrascopes are going to provide us a lot more analysis options. We're going to be able to see the signal in a lot of different ways including things like and a histogram and viewing our audio levels. We also even get a preview of the shot in black and white so we can help, you know, see our overall exposure and check things like focus and stuff.

So it's a very full featured tool. I just want to make one thing clear Rich. Is that, this set, this version of UltraScopes does require, that you have a camera. >> Yeah. >> You can't just, you can't just launch UltraScopes and go, oh I have a set of scopes. It has to be plugged in to the camera and it's best used of course then, in the field. It's only going to monitor a live stream coming from the camera. You go to playback something, it's not going to show you anything. >> Now, I'm just going to throw out there though. If I was in a, a studio environment, I can't really run something into this from another computer, right? >> Right, right.

So that's what the other sets of ultra scopes are intended to do. The pocket ultra scope and the full size ultra scope, and then of course there's other scope options out there available. But this, the main purpose of this is as an on-set sort of confidence checker, if you will, about what you're getting and what you're seeing with the Black Magic cinema camera. >> So you're probably going to bring, as we've already discussed, a laptop on-set anyways because you're going to have to do data management and back up cards. And we've already discovered that we cannot format or erase cards in the camera. So... >> Right. >> Since you're going to have a laptop anyways, the good news is, is just tap out of that thunderbolt port, plug in, get a nice long thunderbolt cable and you could be really checking the details of your shot.

Seeing all sorts of tools for measuring and making good judgements. >> Mm-hm. >> And next, we're going to explore what each of those tools does.

Video: Introduction to the Blackmagic Ultrascope