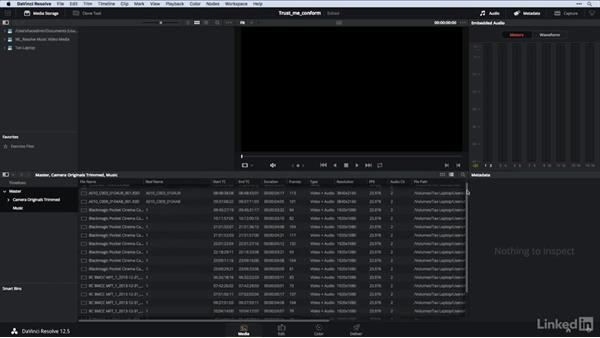 - As I get ready to try this alternative method to import our xml, I'm noticing something else that bothers me. So there's more than one setting we're about to change. The first thing I want to do is delete the timeline, but I can't quite find it, it got imported somewhere into one of these bins. So the first thing I'm going to do is open up my project settings, come down to general options, and enable use timeline bin, expect I can't right now, because I already have a timeline, so I'll create a smart bin for timelines, hit save.

THere's my smart bin, there's my timeline, click it and delete. Yes, I want to remove this timeline. I'll open up my project settings again. I'm now going to turn off the smart bin and tell it to use a timeline bin. It's just my personal preference, try working either way, decide which way you like to work. Now, we're going to go to the master project settings, and when we import an xml, DaVinci Resolve pays a lot of attention to these conform options.

And if I change these conform options, it's going to change the way it parses that xml and re-links to the footage. The first thing I always go with is assist using real names, so I'll click on that. And then it says, from the, and that can be from the dot dot dot. And we've got a series of multiple options here that we can choose from. The one that I usually go with first is embedded in source clip file. In other words, when we import our xml, this time it's going to assist the import by looking for whatever real number is embedded in the source clip.

And we can actually take a look at that. If I press save, come back into media. Let's open up all of our bins, and now all of a sudden we've got real name being populated. If you remember in an earlier movie, it was empty. Now it's being populated. I'm not sure how useful this is going to be. (chuckles) I've got Black Magic pocket camera shots as well as cinema camera shots all with the exact same real name, and there's very likely-- It looks like they might have been using time of day time code, which means these two cameras would probly have overlapping time code. Maybe, maybe not.

So we'll see what happens, we just experiment and take the shot, and if it works, great, if not we try again. So I'll highlight this timelines bin, which is where are timelines are going to get imported into, command+shift+I, or control+shift+I on a PC. Going to pull in the exact same xml and see what happens this time. Again, I am not going to automatically import the source clips. Click okay, and then I'll just click through this, because we have our camera originals and music loaded up.

And I've got some more errors, and especially I've got these two errors right here. So I've got two clips that just aren't re-linking, using this new method. I'm going to watch this down one more time, this timeline, and let's at least look to see if audio sync is working for us. So I'll come down here, and let's take a look at these couple shots on the back end. And then we'll take a look at these shots here. And by the way, I'm ignoring this right now. I'm not even going to bother with what I'm seeing if I can't get sync correct.

So let's hit play. (music plays) What about on the back end here? They look like they were okay in sync, there. (music plays) I'll back it up two shots, and then I'll do a command+F. Hit play. (music plays) Yeah, that's looking way better now. That suggests to me that this is a much more accurate import of our xml. Now we've got two shots there that are missing, I could force conform those, which we'll take a look at later on.

Or I could try method number two, which I want to show you, to see if maybe that solves our problem.

You'll also explore the concept of conforming. Conforming is verifying your timeline in Resolve precisely matches the timeline exported from your non-linear editor. Plus, learn the options for sending your color corrected timeline back to your nonlinear editor for final graphics and export.
Topics include: