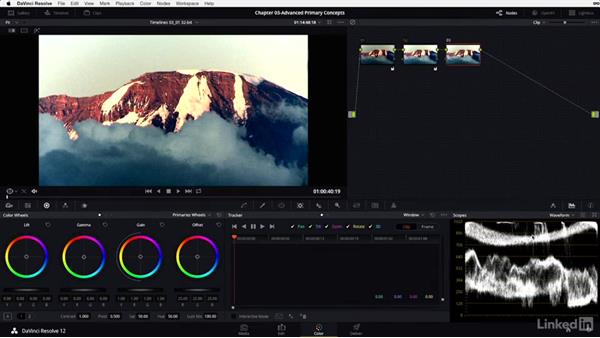 There are times when you will want to get aggressive with your color corrections, only to realize you have destroyed some aspect of your image—clipping out important details. In this movie you will learn why Resolve’s 32-bit float will help you recover back those details, even on aggressive corrections.

- One of the core concepts you'll want to understand as you get proficient in color correcting in DaVinci Resolve, especially as you get used to building node trees, is DaVinci Resolve's 32-bit float processing and what that means. Let's take a look really quickly here at our project settings. And as we look at our Master Project Settings, there's a pull-down called Image-Processing. Let's select that pull-down and there's only one option: 32-bit floating point.

It's a representation. It tells you the kind of math that's happening under the hood here in DaVinci Resolve. So you can't change it. We're always working in 32-bit float. What does that mean to us as colorists? Well, let's go ahead and let's open up our scopes down here. And yeah, we'll go with the wave form and I'll go with the luma-only version of the wave form. And you see we have a very flat looking image, so let's go ahead and expand out the contrast. So I'm going to drop the lift and then I'll kick up the gain.

And this is a very dramatic looking shot right now, so here's where we were, here's where we are. Let's go ahead and hide out our timeline, our clips in our gallery, because we're going to be working in the node tree right now. And I'm going to go ahead and add another node. Option+S. And my client decides they want the sky to be even brighter than it is right now. So I'm going to take my gain control and kick it up. And then right about there is where they're happy. But look at my scopes. Look at what's happened. I've clipped out detail, especially detail here on this highly reflective snow that's hanging on the side of this mountain.

And the question is, well, can I recover this detail? Is this detail clipped out forever? And the answer is, no, thanks to 32-bit float. Even though these pixels have gone well beyond the range of acceptable video levels, we can retrieve this data as a result of the 32-bit float. It retains these peaks up here that were originally in this image and we've now clipped out. So I'm going to Option+S to prove it to you.

And I'll come back to my gain. And notice how I'm pulling all of that detail back. Let's undo that. Now how would I pull that detail back if my client still wanted these skies to be that high? Let's go ahead and delete this node. Well, I'll do an Option+S and Option+L to get me to the Layer Mixer Node. Now both of these nodes are being fed by this node where we clipped out this extra highlight detail. What I'll do in this node down here, node number five.

Remember on the layer mixer node, the bottom node is the higher priority. So node number five is above node number three. So is node number five active? Let's pull a quick highlight key. I'll put myself into the highlight mode, Shift+H. I'm just going to do a luminance key, so I'll only take the highest, highest details. And I don't want even the sky. I want the stuff we clipped out. That detail right there. I'll soften this up a little bit so we don't get a crunchy, crunchy looking key.

I'll do a big blur radius on this. But we still have clipped out detail. But notice, I'll leave myself in highlight mode and I'll do a gain adjustment now just to pull that detail back. Shift+H to get us out of highlight mode. I probably need to go a little bit further. There we go. And I can probably open this up a little bit, just to pull in a little bit more detail just like that. I'm watching my scope as I'm adjusting the threshold here on my low on the luminance channel.

There we go. So I've pulled back some of this detail. Now the key itself, it's a little bit cruddy. I can kind of see the edging in here. I'd have to refine it. But that's the concept of DaVinci Resolve's 32-bit float image-processing model. It retains those details that we destroy during the color correction process and gives us opportunities to pull them back further down the node tree. When you start understanding this, then you don't feel so bad about getting a little bit aggressive early in the process knowing you can always pull back and retain a lot of that detail that you start clipping out.