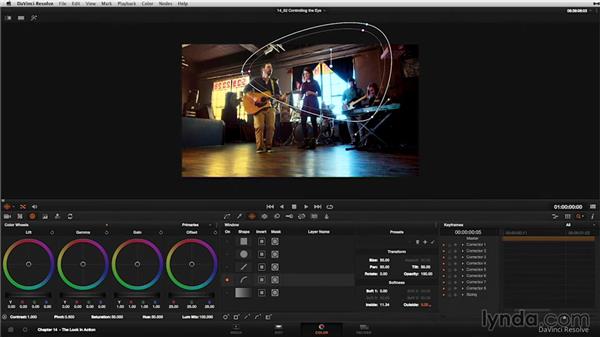 Sometimes the eye is drawn to an area or section of the shot that isn't the desired focus. Fortunately, there are tools you can use to influence where the eye focuses to create more captivating shots. Watch this video tutorial to learn about altering hero shots to control the eye in DaVinci Resolve 11.

- Building upon the work we did earlier in this chapter, I've assigned all of these clips to the group power grade. Now what I want to do is take a moment to control the eye a little bit. You know, when I look at this shot for instance, let's take a look at this wide shot. One of the things I do when I'm color correcting an image is pay attention to where my eye is looking and right now it feels to me like the left hand side of the screen is demanding more attention. So, the first moment when this shot pops up I feel like I'm being pushed to the left hand side of the screen, which is kind of wrong.

I mean, the band members are what's important here. There is nothing interesting on the left hand side of the screen. If this were an infomercial where maybe this number was readable, this phone number, maybe that would work for me, but it doesn't. So, the first thing I want to do is go through this hero shot timeline shot by shot, and decide how I want my eye to move around the screen. We'll just do a couple shots here together to give you an idea of how I do this. I will shift F out of this. I'm going to go ahead at the end of this node tree option S, come into my power window and I'm going to add a gradient power window right now.

I love this kind of shape because it's similar to an oval, but doesn't look to the eye like an oval. It feels a lot more organic. I set it up this way because it kind of matches the shape of the light coming out from the window. Now I'll put in some inside softness and a lot of outside softness. That's probably a little too much. Let's back it up a touch. Now I'm going to invert this and let's take our gamma, drop that down, and again, I'm doing some outside darkening for the whole point of, if I turn off the shape, command D, turn the node on and off, again, I'm taking my eye and pushing it up towards the center of interest on this shot.

Let's pick another shot. Again, I want to reemphasize a point here of looking for sources of light to help motivate you when you're trying to direct the eye. Once again, I'm going to option S. Again, we'll add the three pointed user shape. I'll option F. Now I'm going to let this shaft of light help me define the shape that I'm about to build. Then close this up and then option drag on this point or alt drag if you're on a PC to really soften this out.

Again, I will soften the inside and then soften the outside. Then what I might do is just adjust this a little bit to allow it to come over the faces of our two band members. But still allowing the shape to kind of be defined by the window. Maybe in this case I'll add one more point just to pull it out, but again, nice and curved.

Once again I'll invert, I'll hide the wire frame. When I do this, I like to take a little bit out of both the gamma and the gain. Then if I wanted to enhance this look, I could even do an outside node which would be right click, add outside node, and then increase the gamma a little bit, brighten up the inside a little bit, give this shaft of light a little bit more to work with. But I'm not entirely sure this is the final look I'm going to go with.

We're working at the clip level here, so I don't think I want to do that because I also want this to be able to work with the other looks we're creating, and it actually might work against those other looks. So, I'm going to delete that node. What I will do is just very quickly flip to a different group. Let's look at poppy. Let's see how that looks there. Let's hide the wire frame. Yeah, that works for poppy. Then let's take a look at contrasty and it works for contrasty as well. I'll flip it back to the power grade look and I continue moving through these shots in this manner to help the eye focus where it needs to focus, while also adding a little bit of drama, a little bit of texture to the image while I'm doing this.