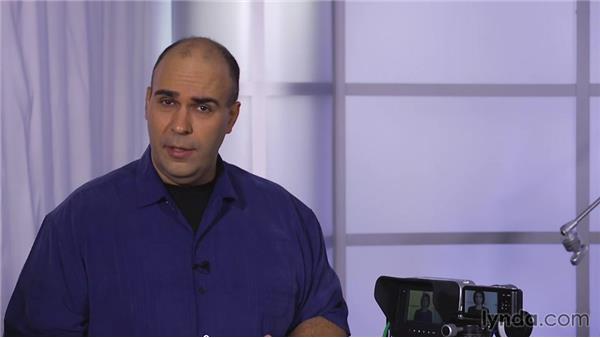 It doesn't matter if your camera is properly exposed, with nice smooth motion and not a lot of noise. If the shot is out of focus, it's unusable. Fortunately, we have several different techniques to help us focus on these cameras, which is critical. The smaller pocket cinema camera in fact is one of the most versatile, because you're not often going to be out with a large field monitor. Many times, you're going to have to depend on the small LCD. Same thing here, on the cinema camera. So by adding some extra controls, Blackmagic Design really did a good job of making focus easier.

Let me show you one of the first things. Now, here on the pocket cinema camera, you'll see that we are easily out of focus. And I'm using a prime lens here, so I could rack focus until I think I get it, but it's a bit tough to know for sure. There is an auto focus button, if your camera has an active mount. Not all of the black magic cameras do have active mounts. But if it does, particularly the pocket cinema camera, you can hold down the focus button. And it will attempt to find focus. So let's knock that out again. It did pretty well. Realize a couple of things. First off, you cannot move the focus target.

So if our subject was off-centered, I would need to pan the camera and center her right on the center mark in order to use auto-focus. Most cameras with auto-focus give you the ability to use the D-pad to move that around on screen to move the focus point, or to tap the screen. No such luck. You need to center up your subject and get focus first, and then recompose the frame. Additionally, we have the ability to punch in. So if I press the OK button twice, I go to a one to one magnification, which makes it a bit easier to find focus.

But the good news is, is if you double tap the Focus button, you'll get focus assist. And you'll see there as edges start to come into detail, you could see a slight green halo, and that helps with the details. Let's hit Auto-focus and see how good it is. Not too bad. And then I'll double press the OK button to go back out. Now realize, those things work in conjunction. You have the ability to turn on focus peaking or focus assist. Just double tap the Focus button to do so.

And you have the ability to zoom in to a one to one ratio by double pressing the OK button on the Pocket Cinema Camera. I recommend if the lens supports it, try the auto focus as a starting point. It will often get you into the ballpark. Just realize that by most DSLR standards, the auto-focus is incredibly slow on the Pocket Cinema camera. Alright, that made sense, works pretty easily. Let's see how it works over here on the cinema camera, and the production camera.

If I double tap the screen, it goes to a 1:1 focus. This makes it easier to tell what you're doing. So now as we adjust focus here, I'm seeing a larger image. That makes it easier to tell whats going on. As I rack through that there, we're just missing focus. We're going right past it. There is no autofocus, but if I push the Focus button up here in the corner, what I can do is I get the same focus assist in green.

And you'll see that it actually shows it to you right there on the screen. If I'm looping out to my monitor, you'll notice here I've stopped recording, that the focus assist passes through to the monitor. This is useful if the client says something to you on set like, it looks soft to me. It looks out of focus. You could very quickly push the Focus button to turn on focus peeking, and see those edges. Don't worry though. As soon as you start to record, that feature is turned off.

It could be very distracting to see that feature on the finished recorded file. So that's only part of the monitoring option. So when you do that Record, it's not being shown on the monitor. So you don't have to have clients asking you why does it look so strange? Alright, we've got good focus on both cameras, but let's recap what we did there. If your camera supports auto focus, feel free to use it to get within the ball park. That was done by just holding the Focus button. And it would go ahead and trigger that with the auto-focus.

Albeit a bit slowly, and your subject needs to be centered. If you want to see a one to one zoom, double tap the OK button to go to one to one. You can also double tap the screen to see it. Besides those two options, double tapping the Focus button on the pocket camera will bring up focus assist, and pressing the Focus button once will turn it on the cinema camera. You'll note that on the cinema camera, the focus assist option remains visible on the camera itself.

On our monitor, you'll see that it doesn't pass that data through. However, the status strip on the bottom that shows we're recording, as well as the file format and the timer for the clip to help people taking notes or logging details on-set are visible. Now that we've got the shot properly balanced, let's revisit how we can adjust the iris of the cameras to deal with any changes while we're on-set.