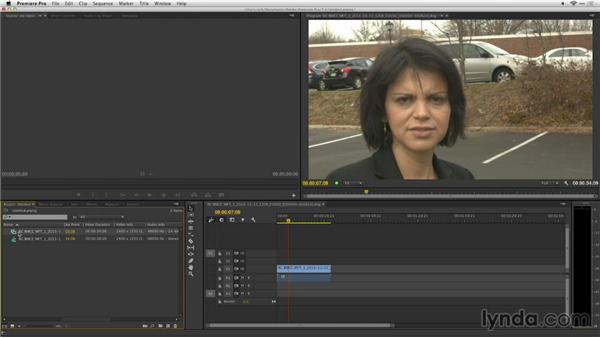 If you're recording to the raw format, it's going to make a Cinema DNG file. But it's not just one file, in fact, it's several files. This is an image sequence format. Essentially, several still images recorded together as separate files, but placed in one folder for organization. If you're recording on the production or the cinema camera, it's going to be regular cinema DNG. And the pocket cinema camera is going to be a loss less or a slightly more compressed version. Here's how it works.

You'll note that I have a folder, here, containing clips. Stepping in, there is a lot of details. So here are all the individual D and G files. Now as you step through that, you get the idea of what's happening. All of these individual images here are recorded separately as still files. Plus, there's an audio wave file for the sound that the camera captured. I can browse these individual files, or in fact, I can even open up a DNG right into an application like Photoshop.

The DNG format in fact started as a still image file. It was basically Adobe's version of a RAW file, and often times photographers will take their proprietary RAW files. And wrap it to an Adobe DNG to make it more compatible. And you can see it comes directly into Photoshop and Adobe Camera Raw. Giving us all the flexibility to adjust the file. Alright, let's switch over to Adobe Premier Pro. And in the media browser, I'm going to select the card. There's all the movie files, and let's go to the image sequence.

You'll see that it automatically recognized that this image sequence should be treated as a video clip. In fact over here on the right you have the ability to choose between viewing as a file directory. Which shows you all the individual files or letting it auto detect the file type, such as Cinema D and G. The benefit of the Cinema D and G, is it sees it as a single file which can be imported into your project. Now, this is being read off of the SSD card with a USB3 connection.

Let's add it to a sequence. It's a very large file. It's a 2.5k image. And I have Premier Pro set to play back at full quality over the USB3 port. Let's press Play, and you see that it handles it pretty well. One of the major benefits though, of the RAW format is the flexibility. Over here in Premier, there's only so much you can do with the RAW file today. It imports and it plays natively, but it doesn't give you access to the RAW decode. Let's import that into After Effects, we'll select the first file, and let it bring in the image sequence.

It'll think for a little bit and then open up the camera RAW dialog. This is going to allow you to apply a single setting across the board. For example, because it's RAW, we could choose a white balance setting using a preset or letting it automatically determine. Plus, you have the ability with the eyedropper to click and set your own custom white balance, something you can't do in the camera. We have full control. Over clarity for selective sharpening. For selective contrast as well as the ability to boost the vibrance for the skin tones.

And play with the overall highlights. And look at those get recovered. How much detail comes back in the sky. Or lift the shadows there for better separation in her jacket. Dramatic control with the RAW file, overexposure. Five stops of information in each direction. Giving you a lot of flexibility for detail recovery. Alright, that's looking pretty good, let's warm that up just a bit. And under lens correction, I can even take advantage of things like upright, to straighten the image, if needed. Or take advantage of some manual controls and simply tell it to fix the lens.

Now, the Black Magic camera is not a choice in here, but you might find the actual lenses that you used And that could help. Or you could just manually take control, enable the correction, and apply a custom control. And notice here, you could bend and wrap the corners as needed as well as adjust things for like edge vignette. Clicking OK will apply that to the entire image sequence, and brings it in as a clip that's ready to use. You see the difference there. The ProRes files or the HD, much easier to work with.

Simple Quicktime containers can come in. Very simple, very easy import process. The Raw CinemaDNG Workflow is still evolving. Premier Pro and other editing tools can often import it, but you have to go through some greater lengths in order to get the flexibility to work with the raw data. But I expect you'll see that this is an area that continues to improve and will add updates and additional coverage as more people unlock this functionality.