Editing into a timeline 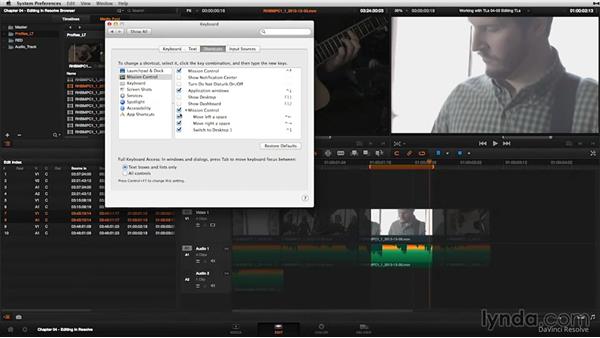 The timeline contains all of the video and audio clips for your project. In DaVinci Resolve 11, you can edit a timeline to add and remove clips, cut clips, and more. Learn how to work with timelines, including creating timelines, putting clips into timelines, and rearranging clips within a timeline, in this online video tutorial.

- In this movie we're going to take a look at the various ways we can create timelines, we can put clips into timelines and generally rearrange clips within a timeline. Let's start by creating a new timeline folder which allows us to organize our timelines. I'm going to right-click in this folder area here and Add Folder and I'm going to call it Working with TLs, for timelines. Now of course, I could right-click in here and create a new timeline right off the bat and create an empty timeline.

But instead what I want to do is something a little nifty we can do in the Media Pool. So let me jump into the Media Pool and let's take these four clips right here; one, two, three and four. We'll start with the first one. I'm going to flip us into the list view because this gives us the film strip mode. I can turn the film strip mode by toggling it on and off. If I want to get rid of it, I can turn it off or I can show it. In this case, we want to show it because as I hover I'm seeing the actual underlying clip which means I can select in and out points. I'm going to mark in and out for each of these four clips.

I want to use my mark in and out, Create New Timeline. Great for a dailies work flow where maybe I want to trim out the head and tail and just keep the meat of the actual takes. Let's go ahead, rename this timeline, 04-03 Editing TLs. Now of course, we have a variety of other tools that allow us to edit into a timeline. I can mark my in and out here and just click and drag and now I've got Insert, Overwrite, Replace, Fit to fill and Place on top.

I can select any of these. Let's go ahead and let's select Place on top where it created a brand new video track for me and a brand new audio track and cut the video and audio into those tracks. Another option, and let's select a different clip. Just click and drag and I can just drop this right here anywhere that I want in the timeline. If I undo that and on here set a mark in and mark out it will accept those in and out points and drop them in.

If I undo that I could of course come in and set a mark in and set a mark out and then I'll come to this clip... Press Return to pull it up to the source viewer and back time it in by giving it only an out point. And then Option i cleans out the in point and now, since I got three points, I can do a three point edit. And let's go ahead and do an overwrite and if I come up to Edit, Insert/Overwrite Action, Overwrite is f10.

I just don't want any of these things overriding what my editing software wants to do. (Chuckles) Close all of these up and then I'll toggle all of these off and now... Close out of my keyboard shortcut and now let's try the f10. And it just did an overwrite which was back timed in using my in and out points. If you're on a PC, you might have to do something similar depending on how your PC is set up. Once I've got clips on the timeline I can start dragging them around.

I have snapping turned on right now so as one end or the other of the clip that I'm dragging gets close to another edit point it wants to drop right in. Which is a great behavior if what I want to do is precisely line up an edit but I'll release this and now let me try me try to drag it just two frames over. And I can't because snapping is turned on. I can turn snapping off by pressing n and now this little magnetic icon goes dim. Now I can do a one frame or two frame.

Let's say I change my mind, I do want to turn snapping on. I'll press n and now snapping is turned back on and I can precisely align it with this edit. But the snapping stays on, I'll have to press n again in order to turn it off. If I want to take this same shot and use it again, I can Option click and drag and it doubles up the clip. I'll go ahead and delete that. Often times what I want to do is split an edit so I'll press cmd + b and it just split a clip in half. If I go off the edit and zoom in, you can see the difference between a regular edit point and a split edit point.

It has that little dot going on. If I go ahead and just turn all the thumbnails off, you can see clearly I got a split edit going on here. There's another way of creating a split edit which is using the backwards slash. I'll press cmd + backslash and I've just created a split edit that way. If I want to delete that split edit, all I have to do is highlight it and I can do that by pressing the up arrow, now it's highlighted and I'll press the delete button and I've just deleted the split edit. If I've imported an XML and I want to find all the split edits in there-- Because lots of editors will do that, they'll add edits but leave those through edits when they're done.

Well I can go ahead and find them using the edit index. Pull down on the options, and Show Through Edits Only. And now it's going to filter only to those clips that have a through edit associated with them. I'll click on edit five-- And this is a really quick and easy way of finding any clips that have through edits associated with them. Now that I'm on it, I try to delete but nothing happens. That's because I have to select the edit itself and for that I can use the v button. And now I've selected the edit on track one.

I'll also shift and then click on track two to select the edit on track two both for audio and video. And then I'll use the delete button to get rid of that. And now my filter timeline shows me, yep, no other clips have through edits on them. I'll click Show All, shift + z to line this all up. If I want to take a clip and move it around and put it on a different track without adjusting where it's timing is-- If I want to take this clip and move it precisely up without taking the risk of it going one frame or another frame off, what I can do is hold down the shift key and click and drag and it will not let me shift this clip out of time even though I'm pulling it up and adding it to a new track.

With our clips in the timeline it's time to start manipulating these edit points.

Video: Editing into a timeline