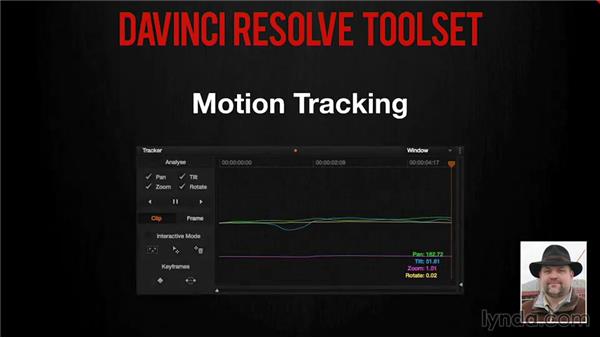 The DaVinci Resolve software has existed for more than 10 years, and it comes with a massive selection of tools for you to use. DaVinci Resolve is able to assist with common color correction tasks, but also has the power to help you with more complicated projects. The software also has a variety of plugins and supporting features, such as lens flare, glow, noise reduction and more. Watching this online tutorial will give you a succinct and clear overview of the DaVinci Resolve toolset.

- Let's talk about DaVinci Resolve's core feature set. Since resolve is a very mature product, it can feel a little overwhelming. To make it easier, think of Resolve as a huge collection of individual color correction filters organized into a coherent interface, and it's optimized to make quick work of common color correction tasks. Keep that in mind throughout this training, and you'll find you'd be able to slice and dice your way through DaVinci Resolve much more easily and probably, even translate the concepts you learned here into other color correction tasks you might perform in other pieces of software.

Now, central to the DaVinci Resolve paradigm, and perhaps, it's most intimidating feature is the notion of nodes. Resolve is a node-based toolset. The image in this slide is a frame grab of a moderately complicated node tree. Each of those squares is a node, and every node has access to the entire DaVinci Resolve feature set. Nodes can be rearranged, split apart, and recombined. They can be layered and composited on each other with several different types of nodes designed for those specific kind of tasks.

By the end of this training series, you'll be creating node trees just like this, and it'll actually make sense to you. So, what are the core tasks? Or think of them as individual filters that each node can perform. Let's take a quick tour. Keeping in mind that later chapters in this training will go in depth into all of this. Primary controls. These are identical to almost every three-way color correction filter you'll find. They allow you to perform, what I call, big honking corrections to your images.

These Lift-Gamma-Game controls overlap each other so broadly that they allow us to make extreme corrections that reduce the chance of unwanted artifacts, but the result is moving one of these controls, often forces you to make adjustments on another. Secondary controls, such as the Hue-Saturation-Luminance Qualifier pictured here, or the HSL Qualifier, allows you to isolate specific areas of an image for the purpose of changing those specific areas.

For instance, you can select a dark over saturated red for the purpose of desaturating it to create a more natural looking image. Power windows. They are another secondary control that lets you use shapes to isolate areas of an image. For instance, you might want to isolate the sky for a richer color while also adding more contrast in popping out the clouds. DaVinci Resolve is famous for its power windows as we'll explain in a later movie talking about the DaVinci heritage of power windows.

Resolve's tracker is extremely deep and surprisingly, easy to use. It's used in tandem with power windows, allowing you to attach a shape to a moving object, making the job of isolating that moving object super easy. And when the tracker fails, it has a strong toolset to allow you to clean up and revise the track, making all but the most complex tracking, relatively easy. Plug-ins. Who doesn't love plug-ins? This feature was introduced in DaVinci Resolve 10, has been further enhanced here in Resolve 11.

Now allowing OpenFX plug-ins as transitions in a timeline. OpenFX or OFX for short, is an open standard that allows software developers to produce filters and transitions that should work in any software that is OFX compliant. At least, that's the theory. In practice, you'll want to first test any OpenFX plug-in that doesn't explicitly support DaVinci Resolve before you go ahead and buy it.

You'll find plug-ins for lens flares, glows, noise reduction, film-looks with more coming to market. They can range in price from a few hundred dollars to several thousand dollars. Resolve also has high quality blur and sharpen tools. They allow for per color channel adjustments and if you switch the color space of a node, you can do some pretty sophisticated blurring and sharpening, depending on the problem you're trying to solve, or the look you're trying to achieve. In another movie, we're going to talk about the differences between the paid version of DaVinci Resolve and the free version.

And noise reduction? It's one of those differences. If you have the paid version of Resolve, which requires a physical USB dongle, you'll have access to its noise reduction toolset. I personally have found the temporal noise reduction tool to be extremely effective and I use it all the time. Though there are some third party OpenFX plug-ins that can take its place, usually at the cost of slower rendering speeds. With all these tools, what cameras does Resolve natively support? Especially because there are so many different cameras, and so many different codecs.

Whether you're on the specialty high-speed Phantom, the Workhorse Arri Alexa, or Blackmagic's very own Cinema cameras, Resolve is likely to support your camera and its native codec, and if doesn't, just wait a few months. It seems Resolve is adding new cameras and new codecs with almost every update. And, if you're looking for our RAW controls, Resolve supports the RAW codecs for most of those cameras offering that mode of recording. These are the core tools in Resolve, but rest assured, there are many more from the gallery to the light box, the collaborative workflow to the quick preview of predefine looks that ship with Resolve.

This overview, we're just scratching the surface. Join me for the rest of this training to become proficient on this versatile piece of software.