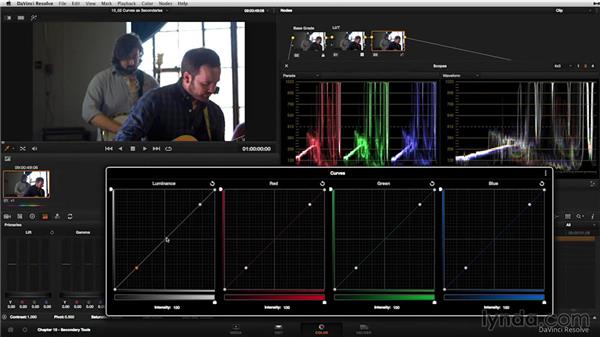 - In previous chapters we've explored the primary tools and using them to help us create a base grade. These are tools that affect the overall image. Now we're going to take a look at the tools that can be used for secondary corrections or targeted corrections. Now, I've done my base initial grade on this shot. And just like we did in the chapter on doing the base grade, I've applied a LUT here to the second node. I've done my base grade feeding into that LUT. So I've got my three node structure that I talk about.

And if you're not sure what I'm talking about, be sure to go back to the primaries chapter on the movies on LUTs and then watch what I do in the base grade chapter where I color correct using a LUT. Now, let me get this interface set up so that we've got room and we can see the scopes because I'm going to pull up my scopes, shift command W or shift control W on a PC. And it's tough for me to see the viewer here. So I'm going to go ahead and I'm going to hide the gallery. I'm going to give us a little bit more room here on the node tree.

And I'm going to hide the mini timeline so that I've got a slightly bigger viewer. And I'm going to be using this visual setup for the rest of this chapter. So I've got my base grade, the image is looking pretty good here, and I'm going to come down into node number three. And the next tool I want to talk about that we can use to make targeted corrections is of course curves. Now, we've talked about curves previously in the chapter on primaries. And if you're new to this tool and this is the first time you're seeing this, I suggest you go back and watch that movie first, come back to this, and then you'll have a very complete overview of this custom curve interface.

Now, as I've shown in previous movies, we can click on this little button here and get us our gigantor curves. Let's move this up a little bit so we have a little bit more to see here, get up our gigantor curves. And besides making very broad corrections, as in this, we can make very targeted corrections. So if I wanted to affect mainly the midtones but leave my highlights and my darkest shadows alone, well, what I could do is hold down the shift key while clicking really anywhere in the graph. Wherever I click in the graph, if you go up, straight up, make a straight up arrow, resolve will put a point there.

So I'll shift and click, and it's putting a point here. And the advantage of doing it that way rather than clicking directly on the line, is no matter what I do it's really hard to click on the line without moving it. So if you want to put a dot on the line and not move the curve, just come off the line, hold down the shift button and click. And now you've got one control point. And I'll put another control point down here. What I'm doing is I'm protecting this portion of the image and this portion of the image from what I'm about to do, which is put a point in the middle.

And I do want to move this, and I'll try moving it up or down to give me the look that I want to go for. So maybe I want to go for a very contrasty-kind of midtone, something very video-y, that's what that move just did for me. So this was a very targeted correction. And how broad it is depends on how far apart these control points are. This is what we're talking about doing a secondary correction, I can also reset this. And I can do it to individual channels. So if I ungang my custom curves, I can now work within these individual channels and so I can shift click and put a control point here and put a control point here, and now I'll just click and drag.

And now I'm affecting my reds but just within a very narrow rank, you can see it on the picture like right here on the side of his face, you can see what's going on there, all right, a very targeted correction. Let me go ahead and reset, and I'm going to regang these. And here's another type of isolated curve that's one I use all the time which is I'll put a control point there. And then I'll take my highlights and maybe I'll drop them down. Now, on this particular image that's probably not the right choice to make, but oftentimes this is precisely what I want to do when I just want to take down a narrow range of the highlights and control it a bit more.

And then to reiterate a theme running through this series, I can just click on this control point. And the moment I move it, now I'm making a big move over the entire image, and it's a primary. Now, one thing I could try to do is grab a control point and then bring it back so that I align these to a 45 degree intersection. And if I do that, notice how this line straightens out and now I'm bisecting these four by four boxes straight down the middle.

And so what I've done is I've done a big hunk in primary and then I've taken the shadows and put them back to where they were so that they wouldn't be affected by what I'm going at the top point of the image, again two control points. So I'm going to reset this again. And this is just an example of how curves can be used as a secondary tool because, frankly, curves are an extremely flexible tool. You can use them in a lot of different ways. And whether something is a secondary or a primary correction often depends on your intention.

And that's a really big point that I hope you get as we work our way throughout this chapter, that tools that were once primaries can suddenly be secondaries, and tools that you're using as a secondary can suddenly be turned into a primary if you open it up and let it affect the entire image. Coming up we're going to do a bit of a rewind and take a look at a tool we just kind of passed over in the primaries chapter.