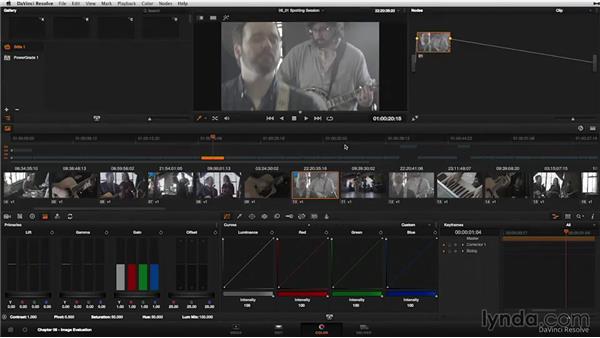 Hero shots are key frames within a video that are either troublemakers, which the client has flagged for improvement, or shots so iconic that they accurately represent the project as a whole. In both cases, a creative spotting session, where you select hero shots and do timeline filtering, will mark which frames you will want to focus your attention. This process also allows for a cohesive overall view of your DaVinci Resolve 11 project, both in terms of adjustments needed and cohesion.

- As we start here in Chapter 6, my focus is going to be, how do I start a color correction session? What do i start with? And in the process of doing that, we're also going to learn how a colorist evaluates an image based on contrast and color. So what I'm going to do, now that we've finished revising this initial XML in Premier Pro, I've imported this in. And if you're following along with the Exercise Files, I'm in Chapter 6 Image Evaluation, and I'm starting in the timeline 0601 spotting session.

Now what is a spotting session? Let's jump into the color page. And what we've got here is a music video. Now, I haven't give you the full three-minute music video. We're looking at about a one-minute excerpt of that music video. But when I start a color grading session, the first thing I want to do is flag what I call "Hero Shots" or "Key Shots." These are images that are either very representative of the project at large. They can be oftentimes images that the client says, "I don't know if we can save this image." It's something that concerns them at the very beginning.

So I want to flag that and deal with that at the very beginning. Or it can be an image that's kind of iconic of the entire project that they look at and say, "I love this shot, I want to put it up on the poster, I want to see how great we can make it look." So what I'm doing is, pulling selects, selects that I am going to color correct first before we do the entire job. My other option is just to start here at the very first shot and just work our way sequentially, and I don't like to do that right off the bat because I want to have a discussion with my client. In fact, I want to spend a little bit of time looking at a range of shots - different closeups and wide shots, shots that are dark, shots that are bright - and get a feel for the footage, what the footage will give me while creating a conversation with my client and Hero Shots are the perfect way of doing that.

So what we're going to do is, I'm going to play down this one-minute timeline, and as I get to a shot that I consider, oh, somewhat iconic of this particular timeline, or that maybe is a problem, I'm going to flag it. To flag a shot, you right-click in the thumbnail, and you come up to Flags and now we have a selection of colored flags. Now it doesn't really matter what flag you use. I tend to use blue because it's the first flag in the list and I don't have to keep pulling all the way down to the bottom of the list. So if I see a shot that I want to flag and use as a Hero Shot, it will get tagged as blue.

So, let's go ahead and do that. I'm going to Option-F and let's hit play. (contemporary rock music) And this wide shot comes up all over the place and I think I want to grade the wide shot because oftentimes once you grade in the wide shot, now you have something to match into as you punch in to various medium shots, closeups, two shots, reverse angles. That's why I always like to grab a wide shot whenever I can. So I'll Option-F back to see my timeline, and right-click and flag this first wide shot as blue.

This looks like it could be a problem shot. Very lifted, it looks very different than the other shots we've seen before. So this is a good candidate because this is a problem that I think I might need to solve. Maybe my client thinks it's a problem. So let's grab that one. (contemporary rock music) Now this is a good one because I want whatever I do, whatever look I create, I kinda want to wide shot to be able to cut into this. So this might be a good one to grab just to make sure that whatever grading we're doing works with this shot as well.

Let's grab that. (contemporary rock music) All right and let's put these two shots that are back-to-back. We have some similar angles already, but let's grab these and then we can always unflag these if we want. if they end up being repetitive.

(contemporary rock music) And then the closing wide shot. All right so, now if I come back into my timeline you can see we've got all these blue flag shots and then, what's the point of flagging them? Very simple. We get to use a really nifty feature here in Resolve, which is Timeline Filtering. So I come down to this little eyeglass menu here on the color page, and now I can filter this timeline by Flagged Clips. So I come down here and select Blue Flag. And now, I've got this thumbnail timeline that filtered down just to the blue flag clips.

Notice my mini timeline is still fully in effect here. It's the mini timeline showing me every single shot. If I come back to the beginning and hit Play, notice first of all the audio doesn't playback because everything is out of sync. You can see how the current time indicator jumps to the shots that have been flagged throughout the timeline. So audio playback gets turned off. But what I've got now is a nice representative timeline in order to start color grading.