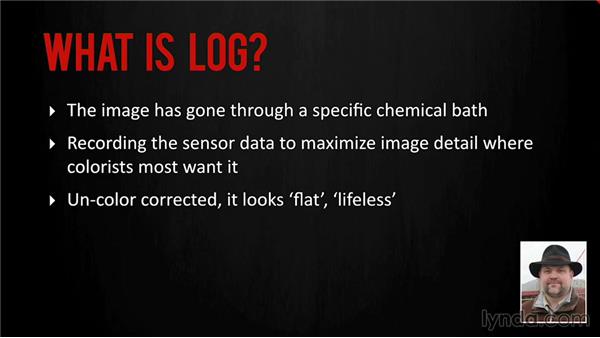 An overview of colorist lingo explores raw and log formats, and lookup tables (LUTs) in DaVinci Resolve 11. Raw describes a file format that lacks image processing features, like exposure and white balance, that most cameras add automatically. Raw files allow users the greatest opportunity to alter a video in post-production. While raw files are very large, log files are smaller, and come with basic processing. LUTs come in several types, and allow quick adjustment of log and raw files.

- In this movie, we are going to talk about three different terms that have become a big part of the post-production lexicon over the past six years. What I'm gonna do is try to give you a quick overview of each of these terms. Honestly, each of these could be an entire training series, so I'm just gonna give you some basic definitions, that way, we're all talking from the same script. Let's start with RAW. When we talk about recording RAW off of a camera, what we're talking about is a file format that gives us the signals straight off the camera's imaging sensor.

What do I mean by that? Well, in traditional cameras and recording formats; exposure, white balance, saturation adjustments, these are all automatically applied during recording for the purpose of giving us an immediately pleasing picture. The whole point in a RAW recorded workflow is not to do that. The whole point is to give us as much latitude as possible in post-production so we can mold the image the way we want it to look. One way to describe the RAW workflow is to think of a film negative.

Within a family of film stocks, there are different negatives you can choose for slightly or sometimes very radically different looks. And then once you expose the negative, you can use different chemicals to develop the film differently to change the way the negative looks once it's fully developed. This image is from Resolve's RAW Project Settings panel for red. You can think of this Gamma Curve pull-down as the chemical bath that develops the final image, which becomes our starting point for color correction.

Now here in red, there's also a pull-down for Color Space and you could think of that as selecting a specific negative that defines how colors and contrast are affected by the Gamma Curve chemical bath. Of course, the big fat difference between film and digital in film, once you make your decision, you are locked in. Here in Resolve, we can override our initial decision at any time, on any shot. LOG tries to achieve the same goal, but differently.

Whereas RAW gives us all of this sensor data that we can manipulate, the price is really big file sizes. In LOG, basic data such as white balance are already burned into the image for us. Our starting point is what it is, but the file sizes are much smaller and the computer has to work a lot less harder to show us the image we're gonna start color correcting. LOG records the image to give us more detail in the areas the human eye considers most important at the expense of areas where the eye has trouble seeing.

The end result; the picture itself looks very flat. It looks very lifeless. Where RAW and LOG are similar is that they are both designed to go through the color correction process. They both make the same assumption; you are going back to the camera originals. Both also benefit from proxies being created for editorial with their contrast and saturation expanded, so that editorial isn't looking at these flat images that have no detail and are difficult to judge. Both benefit from the proxies being named identically to the RAW and LOG originals for very easy re-linking at the color correction stage.

One final point, RAW can be developed to a LOG starting point, but doesn't have to be. And this brings us to the notion of look up tables because very broadly, look up tables can be applied to both RAW recorded and LOG recorded images, but during color correction, LUTs are considered somewhat optional. Now, what is a look up table or LUT? There are technical look up tables, and those are very precise. They're designed to take you from one color space to another color space.

Kind of like moving let's say from HD color space to the digital cinema color space. It's a technical LUT; it's either right or it's wrong. And then there are what I call creative LUTs, LUTs that are designed to expand out the contrast and saturation of our images. On ARRI's website for their cameras, they provide 12 different LUTs for their LOG recorded images. Which one is right? None of them and all of them. It depends on how your images were exposed and the end look you're trying to achieve.

You select the one that gets you to where you wanna go quickest. And that's why I call these LUTs creative LUTs. LUTs are not one button auto-color corrections. They still require us to be intentional about using them and deciding, do we even want to use one? Here's the thing, you can throw your creative LUTs away. You don't have to use them. In the end, they're designed to try to get you a more pleasing picture in one quick step, but you'll usually find you'll have to prepare your images so a LUT can be applied to get a consistent end result from shot to shot and scene to scene.

After applying a LUT, you usually need to do some work for shot matching and finalizing the finished look. Sometimes it's just quicker, easier, simpler to bypass the LUT, don't use it, and just color correct normally. Other times, LUTs can be huge time savers. The thing is, you don't usually know until you try. The truth is, this is really just an intro to an intro. I could to a three-hour class on this stuff alone. It goes deep and I encourage you to continue learning about RAW, LOG, and LUTs.

More and more productions are recording RAW and LOG and it's becoming a much more important part of every colorist's job.