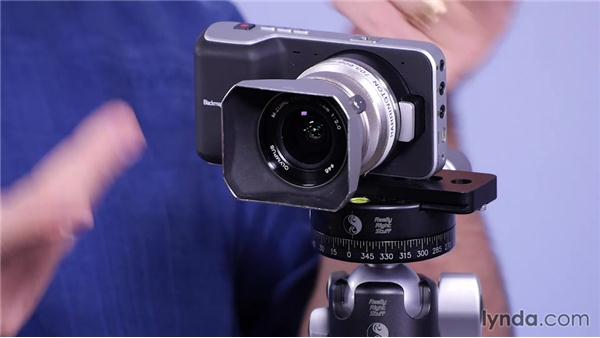 Lets start by taking a detailed look at the Blackmagic pocket cinema camera. At the time of recording, this is currently a $1000 camera, more or less. It will vary slightly as you move through different economic markets, but it's designed to be affordable to many users. In fact, it's priced below what most DSLR cameras cost for a similar style body. Now, this particular camera uses a Super 16 digital film style sensor. This produces a relatively large crop factor and I've seen it behave, more or less, at about a three times magnification.

Now, the exact crop factor is about 2.8. What this means is that this crop factor factor is going to create a punched in type look. So, when you put on a lens that is, say, 12 millimeters, it behaves more like a 35 millimeter lens. That makes it a bit challenging to go ultra wide on these type of cameras. But the same sort of challenges exist on many micro four thirds cameras. Like Panasonic's GH3 or the E-M1 from Olympus. Now, those tend to have a two to one crop factor but this is still quite reasonable.

The camera itself is very solid. It has a magnesium alloy type chassis. It feels solid. It's metal. It has mount points on the top and the bottom making it easy to attach accessories, and they don't feel flimsy. It's not a plastic body. This is a metal, heavy-duty camera designed to be rugged, which is great. One of the things I really love about the camera is the fact that it has 13 stops of dynamic range. You're not always using this dynamic range. If you're shooting in video mode, you're not going to see that wide of coverage.

But, when you shoot in a log space and then you apply a LUT, a look up table in post production, the image is expanded, giving it an incredible range of coverage from lightest light to darkest dark. And I find it's incredibly easy to shoot with this camera. There are some other things about this camera I like. It has the ability to offer focus assist, to help you see if things are in focus, which is really useful when you're dealing with a very tiny screen. What we're looking at here on a camera like this, is that you're often going to be using the small built-in LCD for critical monitoring.

And, because we can turn on options that help us see what's happening, this is really useful and it makes it that much easier to tell, if you have a shot in focus or not. The fact that a camera, that's this affordable, offers RAW recording is amazing. This allows you to do affordable visual effects shots or shoot in some of the toughest lighting conditions. Now, as we're working with this, I love that the camera has an active Michael four-thirds mount. This means that a wide range of lenses can be used.

The benefit here, is that you could use affordable lenses, you don't have to purchase cinema style lenses. This opens up a world of photography lenses, and it really works well. Now, the camera itself has a benefit that I absolutely love that the other cameras don't. And it's going to sound a little silly. But it's actually true. This particular camera offers the ability of removable batteries. Now, you might be surprised that the other cameras do not. It only has a single built in battery. You can get third party kits or modifications to attach external power, but this is a nice simple clean solution.

Unlike something that the other cameras can't do, I can easily open that up, pop out one battery, take another battery, put it in. There we go. Lock that down and continue shooting. The particular camera here is great in that you can swap batteries without having to buy a bunch of third party. And these batteries, while they don't have extensive life span, are very reasonable. The camera includes a strap, which is not incredibly useful, but it does have an external power supply so you can run off of that power supply or charge the camera.

This means that when you're on a tripod in a controlled situation you can be tethered to wall power and then when you need to, you can unplug and then go hand held. Keep a spare battery in your pocket. Now, this particular camera essentially offers one frame size. 1,920 by 1,080. It also includes standard frame rates like 23.98, 24p, 25p, 29.97 and 30p. This is giving you the flexibility to shoot for both video formats and digital cinema formats. The focus button will actually work with the active focus on the lenses.

So you could tap a button, and it will autofocus. And then, by using some of the focus peaking, it's easy to refine that focus. This makes it really easy to get the results you're expecting. There are some additional features we'll explore a little later on. But one of the things that's a little bit weak with the camera is the ability to get things in. Now, we do have an audio input and you can use a simple adapter to go from XLR to a mini style plug. This makes it easy to actually attach professional microphones. Let's just run that it, as well as plug in headphones to monitor.

You also have a length control which can offer some remote start and stop capabilities. This is just a simple controller, but there are lots of options out there, and this could give you the ability to mount the camera in some place that's difficult to reach, whether that's up high or attached to a vehicle. And then remotely trigger that for start and stop, as well as other controls. This can really come in handy. One of the things I also love about this camera, and all the Blackmagic cameras have this, is the ability to add metadata to the clips, and control how the clips are named.

This gives you a lot of options to really take control. Now, the camera has two mounting points. One on the top, one of the bottom. You can easily get a cage to modify this. And it does support standard Apple ProRes data rates of 220 megabytes a second. It will do a RAW format, but the RAW format that it does is a slightly compressed cinema DNG RAW, which is a standard control by Adobe. It's a little more compressed than the other style of RAW that the other two cameras record. You do also have a micro HDMI port which makes it easy to attach an external monitor, or go to an external recorder.

So, all in all, pretty good controls, amazing at the price point that's there. But you do have to think about some of the inputs and outputs if you are looking to attach additional devices to the camera. Alright. That's the essential idea here. Remember, you could attach this to a computer with a USB cord. For things like firmware updates and we'll explore that later on in our course. But this is a camera that's meant to be small, portable, and easy to use.