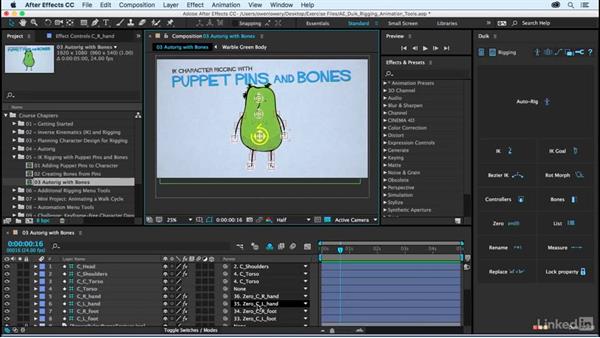 Join Owen Lowery for an in-depth discussion in this video Autorig bones for a full character rig, part of After Effects Duik: Rigging & Animation Tools.

- [Instructor] I'm in 05_03, Autorig with Bones.…Here we have our green warble character,…and it has its puppet pins and its many bones…made from those pins, re-named for easy reference…and now all we need to do to finish up…is rig those bones!…So, I'm gonna start…by going ahead and selecting all my bones.…I'll select the top L_Hand,…hold down shift, select the Head,…and they're all selected, great!…Now I just need to make sure to go to the Auto-Rig menu,…and in case you can't find it,…just up to the little Rigging icon up here,…go to Auto-Rig and click on that,…and that'll bring us here.…

This is an upright walking character,…so I'll leave it set to Plantigrade,…and I'm gonna click on the Full Character rig.…So, right off the bat…since we named everything to correspond…with the names here,…like Left Thigh, Left Knee, Left Foot,…this is already filled in and good to go.…So I'm gonna go ahead and click Next.…Next we have the Right Thigh, Right Knee, Right Foot…corresponds, good to go.…Next we have the Front Leg, or the Arms.… 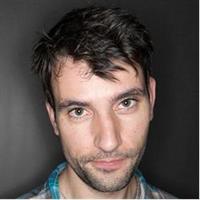