The exposure triangle for low light 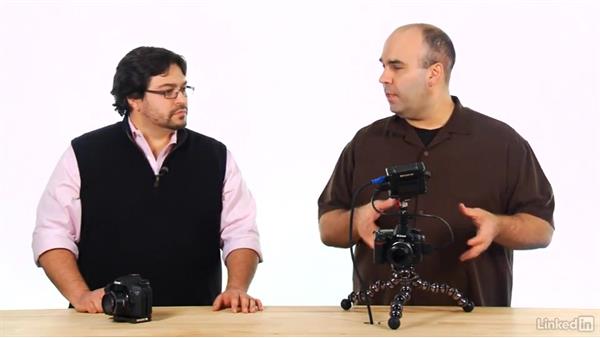 Robbie Carman: So Rich, one of the things that we hear all the time is that people go out and shoot. Then they come back to the studio and they say, gosh, all my footage is really dark and underexposed. Richard Harrington: Yeah, and there are sort of two things there. One could be that you've turned up the brightness on your LCD too high. You go past the default centered value and you're like, oh, the LCD is brighter, but the footage isn't. Robbie Carman: Keep darkening it down. Richard Harrington: You trick yourself. But more likely what's happening and this is usually for people who are just getting started out, they are using the kit lens, the lens that comes with the camera in the box, and let's face it, that's really a cheap lens, or a cheaper lens, designed primarily for outdoor shooting.

So those type of lenses tend to have f-stops for the aperture between about 3.5 and 55, and the more you zoom in the more the f-stop goes up, the less sensitive it is to letting in light. Robbie Carman: And of course the higher number, say f/5 or f/6, versus say f/1 or f/2, that higher number means that you're actually getting less light into the camera. Richard Harrington: Yeah. This goes against everything Americans learn where the bigger number is the worst choice. Robbie Carman: Right, right, right. So you mentioned aperture, but I think that there's other reasons that the image might become underexposed and we generally refer to this collection of reasons, not just aperture, but shutter speed as well as ISO as the exposure triangle.

Richard Harrington: Yeah, and this is a standard photographic thing that if you've been shooting stills for along time you're probably used to. Just like you need three legs to make a table that's stable, the same thing holds true for properly exposed image. You've got the shutter speed, the ISO, and the aperture working together. Aperture is going to control the depth of field. So the lower the number, the shallower the depth of field, and you'll use this primarily as an artistic control. It certainly has technical benefits. Robbie Carman: Right, how much light is coming into the camera, sure. Richard Harrington: Using a prime lens you can get lenses with a lower aperture value.

They are going to let in more light and that's going to work great for you. Robbie Carman: But the depth of field thing is an important thing and that's one of the reasons that people are drawn to these cameras is because they do, because of the large image sensors and using a fast lens, you can create an extreme depth of field look. Richard Harrington: Yeah, the nice shallow look that's really popular, and we are going to explore that more in just a second. Balancing that out though are the two other things. ISO is going to be how sensitive the camera sensor is to capturing the light. So you can boost that and the good news is, is that modern DSLRs can get really high; 1200, 1600, even more than that and do a great job where they never used to, but more--the higher the ISO the more noise in the sensor.

Robbie Carman: Yeah, and that's going to vary also a little bit from camera to camera. Even though the same camera type is 7D to another 7D, the ISO performance is a little different, and later on we will talk a little bit about how to test for ISOs and which one is right for you, but that sensitivity is amazing. I've actually worked with the Canon 1D Mark 4. That camera can see in the dark and I am pretty sure that-- Richard Harrington: And it's not even a full frame sensor. Robbie Carman: Right, and I am pretty sure that the new Nikon D4, it's just amazing what you can do with ISO settings to get that sensor much more sensitive.

Richard Harrington: And the last one that a photographer is used to having a lot of control over, shutter speed. If you're a photographer and you're shooting at sunset and you're on a tripod and locked down, you can go for a one second exposure and just let all that light soak in. It looks beautiful. Well, if you're shooting 24 or 30 frames per second, you don't have that many options when it comes to shutter speed. We typically are dealing with shutter speeds of like 30th, a 50th, a 60th. We will talk about those more in-depth in just a second, but you don't have very many options. So it's sort of like a three-legged table where one of the legs is already set and you've got the other two to adjust to properly get exposure.

Robbie Carman: That's right. Richard Harrington: All right. So let's take a look at each of these legs in-depth as we tackle the exposure triangle.