You call this a mic? 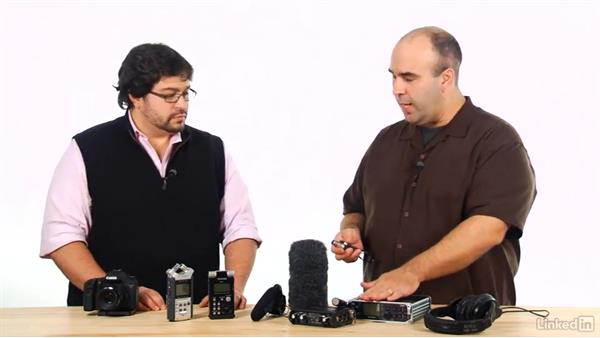 Robbie Carman: Yeah. So that's the first thing, right, is that with these microphones being so small and so and so well not good, we can't expect them to record great audio. After all, when you consider the fact that you have little four little pricks on a piece of plastic, it's not like having a dedicated shot going or higher end microphone attached to the camera. Richard Harrington: Plus that microphone is right next to the lens that if you're doing auto-focusing or adjusting, you are touching the camera body, you are going to hear rub. And you know, let's be honest, unless you were interviewing me this far away, that mic is too far away.

Robbie Carman: You know that these mics, they're not all that great and they don't--you know the audio that they record often people describe as being tinny or kind of hollow or something like that. It's not to say that they can't be used for anything. I mean in a run-and-gun situation obviously having some audio is better than having no audio. Richard Harrington: Right. Robbie Carman: But you know most of the time they're not going to be great resources. But what they are good for is recording reference audio when you're in dual system situations; that is recording audio to say a dedicated digital audio recorder and recording reference audio to the camera.

Richard Harrington: Yeah, these sort of mics are just that, they're for reference purposes or backup purposes, but you do have the ability to run external audio in. There is typically on most DSLRs an audio input jack. It usually is going to be a mini plug like a stereotype plug. So this is going to involve a couple of different workflows. You can use a cable like this and go to an XLR adapter and run it right in. You can use a digital recorder or a preamp. They have preamps that attach to the bottom that you connect the mics in, and they power the microphone, and then it sends out a signal.

So, you know, these cameras have the ability to pull audio in, but there is an inherent danger there. A lot of people don't realize, it's like well, I'm getting good audio, I'm seeing the levels bounce. Well maybe the levels are bouncing, but you don't realize that the mic is clipping because it's too close to your subject, or maybe that there is an electrical interference because a power cord is going over your mic wire. So just because the levels are moving, doesn't mean that you're actually getting good audio. Robbie Carman: That's right. Yeah, I mean, and just like your Nikon, I can hear audio playback on here, but piping it out to a set of headphones or a set of external speakers is something that I cannot do currently on this camera. Richard Harrington: Yeah.

So we're going to continue to see evolvement in these cameras as they start to add new features and they continue to grow. Audio is one of those things that they're starting to become aware of that they need to improve it. You know, if you look at the latest camera from Canon, the C300; there is sort of a DSLR style sensor and form factor, but they actually expanded it a bit. Definitely a focus on audio, but we've also seen the DSLR Killer cameras coming out. Robbie Carman: Yeah. Richard Harrington: Sony F3, Panasonic AF100. Robbie Carman: Large image sensors in those cameras, but more of a traditional video camera type body.

Richard Harrington: Yeah, so if you are shooting strict DSLR, these microphones are just purely for reference. Don't turn the sound off, but don't rely on it for anything other than a cursory background sound, or to help you sync up audio that you record externally on a dedicated device like a Zoom H4n or Tascam, or you know a bigger device like this that has multiple inputs and a built-in hard drive or card that lets you record high-quality audio, monitor with digital VU meters, so you can actually see the audio, which is great, and plug-in professional headphones and monitor.

Lots of different things here, we're going to explore in another title here on lynda.com, a whole sync sound workflow. Robbie Carman: Yup. Richard Harrington: But you know, the key here is to realize that the camera is really designed by people who make still cameras, not audio equipment. Robbie Carman: That's right.

5/31/2016
Audio shouldn't be an afterthought when it comes to video production. It's "half the picture." But many people who shoot with DSLRs don't monitor or supplement the sound that comes from their camera. This installment of DSLR Video Tips answers the most common questions about recording audio for video:

Authors Rich Harrington and Robbie Carman offer simple solutions that will help you capture high-quality audio without a lot of expensive gear. Plus, get run-and-gun techniques for getting clean audio in noisy settings, syncing audio with video in post, and using click tracks to capture great live music performances.

Video: You call this a mic?