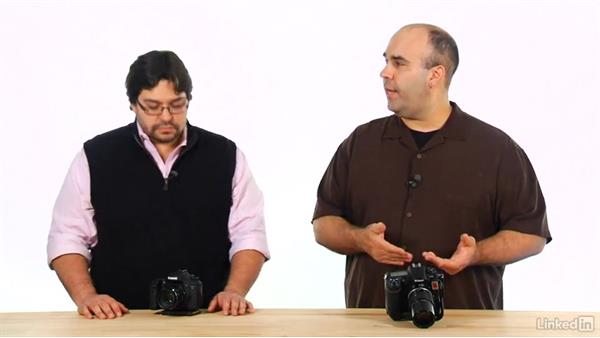 Richard: So just like most industries, video has its own jargon, and one of the terms you'll hear thrown around a lot is aspect ratio. What is this? Robbie: Well, it's a term that people make seem them like it's more complicated than it really is, it's just width by height. Richard: Okay, so comparison of how wide an image is versus how tall? Robbie: Exactly. Richard: So if I go to the movie theater, and I'm watching on the really wide cinema screen, we'll often say that's 2.35:1, meaning that's about you know little more than two times wider than it is tall. Robbie: Right. Richard: Okay, and then if we go home, and we watch on our HDTV set at home, it tends to be? Robbie: Well, 16:9 aspect ratio, but you see, aspect ratios often displayed or are measured rather in ratios like 16:9 or decimals like 1.78 would be 16:9.

Richard: Okay. Robbie: Because you are just dividing 16:9. Richard: Okay, and 4:3 would be 1.33? Robbie: That's right. Richard: Okay, so these numbers are pretty common and what's important to realize is that what the camera shoots is often different, and what you're delivering can vary. You know, you might shoot one video, and it's going to go to regular TV and to an iPad or to a broadcast television on a 4:3 set, so you have to be mindful of different aspect ratios. Robbie: Well, you bring up a couple of interesting points there. First off all with these DSLRs, when you're shooting still photos, most of the time we're shooting at a--I want to say 4:3-ish aspect ratio, it's not always exactly 4:3-- Richard: It's like 5:7. Robbie: Right.

You know, but it's sort of in that square kind of aspect ratio, that's one point. The other thing is these cameras can actually shoot 4:3 video if you want them to, but you have to be in the standard def mode of the video section on the cameras, to be able to shoot true 4:3, when you're in the HD modes, you're shooting 16:9. Richard: Okay, and so I think two things are there that are important. One, when you change the aspect ratio of the camera for different shooting mode, it's going to likely put up some gray bars, it's partially transparent that show you shaded areas. Robbie: Yeah.

Richard: Only inside that area is actually being written by the video files, so the whole Live View panel lights up, but the shaded area is not being recorded. Robbie: That's right. Richard: So make sure you compose the shots, and then if you are shooting for multiple screen delivery, you might be shooting HD at 16:9, but let's say we're intending to deliver to the iPad, well, that's more of 4:3 aspect ratio. Robbie: And believe or not Rich, there are still some people out there who have 4x3 aspect ratio televisions. Richard: Oh yeah. I know lots of folks, I have got relatives like, but it still works, why would I replace it? Robbie: Exactly! So you know oftentimes, instead of actually truly shooting 4:3, because we'll be shooting at a lower resolution, we can shoot HD either 720 or 1080, but then protect for 4:3 safety, and this can be done in a couple of different ways.

The most low-tech way is just to use some tape or china marker or something like that on your 16:9 monitoring device, yes, you can do it back here or on an actual film monitor, and just mask off that 4:3 area. A lot of higher-end monitors, external monitors, that is will allow you to actually put on an on-screen overlay on the monitor to protect for that 4:3 area. Now what's even cool about that Rich is that it will also show you 4:3 Action Safe and Title Safe Zones which are important when you're protecting for 4:3.

Richard: And that's nice because that will allow you to better compose the shots so that action safe guide which we'll continue to explore throughout some of our movies here just helps you understand like bleed in print, you don't want to get too close to the edges. Now besides monitors or manually doing it, if you get an electronic viewfinder, it's really common there as well. Robbie: Yep. Richard: You just turn them on these guides. So I think the key to realize here is that we're pretty much in an HD world, which is 16:9, at least for acquisition. Robbie: Right! Richard: But when it comes to playback, it's all over the place.

You've got 4:3 screens, the PowerPoint presentations, iPads, a lot of mobile phones, BlackBerries. We've got 16:9 for other devices. Even the iPhone, for example, is not a true 16:9, it is like 14:9. Robbie: Right. Richard: And so you might not see everything on the screen that you shot. So it becomes important that you pay attention to your delivery specs, and that might mean masking out your viewfinder or using an overlay feature on your monitor, so you know that what you're shooting is going show up properly on that intended playback device.