Putting it together and setting the shot 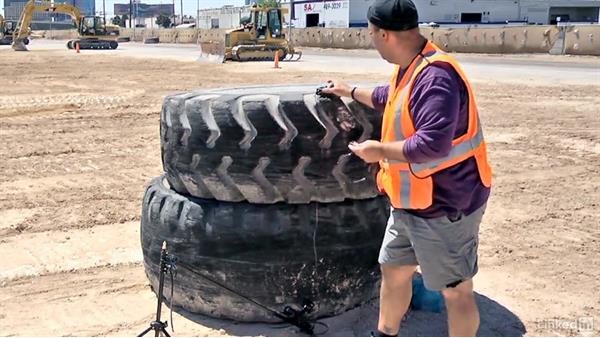 Join Richard Harrington for an in-depth discussion in this video Putting it together and setting the shot, part of Video Gear: Action Cams & Drones.

- I'm gonna position this on the ground now to get the shot.…We'll position this at a slight angle.…And what I'm going for is I want the unit…to go up at an angle…and we're gonna reveal the skyline behind us.…Now I've started behind these large tires,…so there's something for it to pan off of.…So adjust that turn.…There we go.…Everything's connected,…we'll just put that back to the right here a little bit.…

The switch is really easy.…One direction goes to the right,…other direction goes to the left.…And I've got my phone tethered to the GoPro.…Remember, with the GoPro you can create…a wireless network in the camera…and use your phone as a monitor.…And if you want to learn more about…the essentials of the GoPro…be sure to check out the class available here on lynda.com.…It walks you through the menu system,…and how to do things like pair the phone to it…as a remote view finder.…Alright, starting up.…

I can definitely see the shot there.…There we go.…Let's switch the direction.…And I'll check my settings.…I'm set to photo Time Lapse.…

11/14/2016
What's one of the best parts about being a video professional? All the cool gear! In this course, Rich Harrington and Robbie Carman tackle action cams and drones, some of the hottest pieces of equipment for video production. These cameras allow you to capture incredible bird's eye views, underwater dives, long panning shots of landscapes, and "driver's seat" angles of sports and other fast-paced action. Rich and Robbie review the best of the batch, including the GoPro HERO, Sony HD Action Cam, Garmin Verb, and Polaroid Cube, as well as the DJI Phantom quadcopter, which allows you to take your video production to the air. They introduce practical techniques for creating time lapses and other types of shots, developing your footage with programs like Premiere Pro, and keeping you and your gear safe and on the right side of FAA regulations.
Topics include:

Video: Putting it together and setting the shot