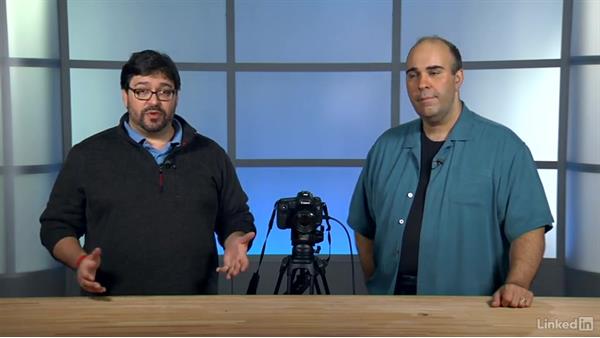 - Hi, my name's Rich Harrington. - And I'm Robbie Carman. - And welcome to this week's episode of Video Gear Weekly. Rob, we have a camera that a lot of people have been looking forward to. The 5D Mark III. - [Rob] Yeah, and it's been out for a little while now, and you know, I think Canon people welcome this camera with open arms. You know, I was a 5D Mark II owner. - [Rich] Yeah. - And when the 5D Mark III came out, what's the first thing I did? I got in line and bought a 5D Mark III as well. The big things about this camera are you know, sort of the same revolutionary features that the Mark II brought, but sort of enhanced.

Obviously, with the Mark II, it was pristine HD video really for the first time in a DSLR form factor, and that kind of ignited a revolution and everybody from independent filmmakers to Hollywood was using it. - Yeah, we actually did a really in depth exploration of that. You and I co-wrote along with our friends, Jim Ball and Matt Gottshalk, a book and basically a video series called From Still to Motion, and we loved this camera. It was so useful, we tried it in different environments, and I got to say, the 5D Mark II, while it wasn't the first DSLR with video, it was the first DSLR with video to really get it right.

- Right, and you know, one of the things about why the 5D Mark II was so successful was because it was a full frame sensor, and it was sort of, you know, a top end still camera, and because of that full frame sensor people went gaga over it for video because of the depth of field and the low noise, and obviously being able to use a wide variety of interchangeable lenses, both photo lenses and cinema lenses, and people went crazy with. People started going, oh I'm going to modify this and make it a PL mount and do all sorts of crazy stuff. - It could shoot in the dark. Look at the low light performance. - [Rob] Right.

- Let's have such shallow depth of field that the nose is in focus and cheek is out of focus. - So Canon really listened to a lot of the issues that people were having with the 5D Mark II, both of them, of course, on the still side, 'cause let's not forget, these cameras... - First and foremost, nine people out of 10 are using this a stills camera. - Right, so a lot of the major market improvements that they made on the Mark III had to do with photo performance, but there's also quite a few video tweaks and video performance things that we'll talk about this week, and overall, Rich, I mean, I think that if you are invested in Canon gear, have used previous Canon cameras, that in all respects, both the photo side and the video side, the Mark III is a very, very compelling camera to use and in another episode of Video Gear Weekly, we'll talk about how to make it even more functional by hacking it with things like Magic Lantern and stuff like that.