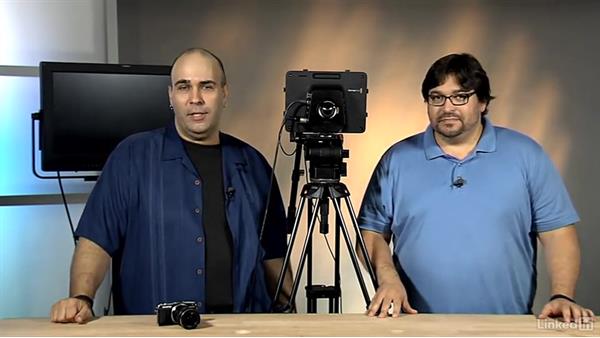 - Hi, my name's Rich Harrington. - And I'm Robbie Carmen. - Welcome to this week's episode of Video Gear Weekly and this week, Rob, we got a new camera. - Yeah - To look at. I like new cameras. - Yeah, this is a cool one. Announced at NAB this year, this is the Black Magic Studio Camera. Now the Studio Camera comes in two variants. It's going to come in an HD version, which is this one that we have right here, and a 4K version. We're lucky enough to get our hands on the HD version and it's a pretty neat camera, but most of all, the best feature is that it's actually shipping which is kind of a new thing for Black Magic (laughs).

- Now, there's obviously, depending upon when you access this in the lynda.com library, these cameras could have been out for a long time, but what Rob is referencing is that Black Magic has a long history of announcing products and then taking. - A little bit of time to get them out there in the wild. - Like a year (laughs) to get them out. - So it was nice to get this, actually get it out in the wild, and this is a studio camera which is a whole new set of features and some drawbacks and that's kind of what we're going to go into this week, give you a little bit of tour of the camera, let you know the things that we like, the things that we don't like, give you a tour of the features of the camera and as I said Rich, this is not a camera for everybody.

It's a studio camera and that entails a lot of things like not having storage and being set up more specifically for the studio. - Yep, and we'll explore all of those things on this week's show.