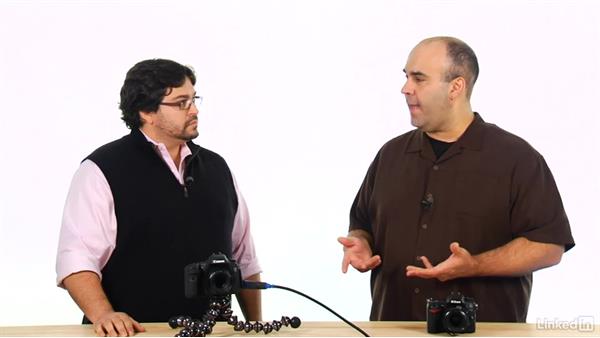 Richard: So, Rob a question I get asked all the time is which frame size should I use? You know, you pop open the menu on your camera, and you typically have three choices. Robbie: That's right! You usually have a standard-def resolution, which is typically 640x480, and in my opinion unless you have to use that resolution, I'd avoid it. Richard: Yeah, standard def kind of lost the war. People really aren't acquiring video in standard definition anymore. I don't even think you could buy a standard definition TV set. Robbie: Yeah, probably pretty hard. But you know, if you need to use 640x480, most of the time that's going to be because a client is specifically requesting that you shoot something in standard def or you just have to fit a ton of footage on a card, but in most cases and most situations, I would avoid it.

It's not really even 60 frames per second, it's 59.94, but we'll get back to frame rate probably in a later episode. That's because, again, on this camera I am on NTSC mode. If I switched over to PAL mode, this option would be 720p 50, or 50 frames per second, so it's just how the camera is setup. Richard: Okay, and that's often used for over crank affects or for specifically matching other footage, so that makes sense. Now there are some other technical benefits to 720p, and one of the ones that stands out for me is capacity. So if I'm out on a busy day shooting, and I've got limited card space or maybe I'm doing out documentary approach, having that increased capacity could just let me shoot for a longer day.

Robbie: Yeah, increased capacity is good choice, but the other thing is you might need to integrate the footage that you're shooting with your DSLR with existing footage. So if you've shot a lot of other stuff that is 720p, well, it makes sense to go and shoot 720p to integrate that footage into a project. Richard: Right, so if the client asked for 720p, give them 720p. Robbie: Exactly, Exactly! Richard: Okay, of course, then we have 1080 and 1080 is king sometimes called Full HD. Robbie: Yep. Yeah, so 1080 is the best that we get in HD, right? Of course there are 2K, 4K and above, you know, sort of digital cinema resolutions, but on these DSLRs the current crop anyway. We're limited to a maximum resolution or maximum frame size of 1920x1080, but that's really good.

1920x1080 is the best that HD is going to get, and generally speaking I suggest people shoot at 1080. Why? Well, because if you shoot at 1080, it's always easy to go down to smaller resolutions, right? Go to 720p or you can go to standard-def, it's more difficult to go the other way around. If you wanted to say up-res 640x480 footage to HD, like 1920x1080, it's not going to look so good. Richard: Yeah, remember when you're discarding information, the picture still stays sharp, when you try to artificially create new pixels by blowing it up, it's going to get soft or pixelated.

Robbie: So that just doesn't work. Richard: All right, so to recap, when you're in that menu system, you are typically going to have three choices, standard def, not very useful, pretty much avoid it. Robbie: Only if requested, yeah. Richard: 720, great, if you need increased recording capacity, client asks for it or you're going for a Motion effect. And 1080, probably what most people should be shooting most of the time if their camera supports it. Robbie: Yeah, I agree with that. Richard: All right, great! So there you have it, which frame size should you shoot?