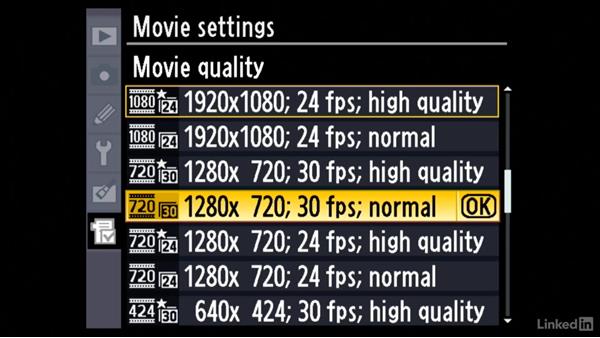 Richard: So, a question that I get asked all the time Rob is which frame rate should I shoot, because it's confusing, you got all sort of choices in that menu, and I think it gets even worse because what the menu says isn't necessarily exactly what you're shooting. Robbie: Yeah, that's right. I mean, there are lots of frame rates to shoot and to choose from. Let's start with the bottom, and we sort of work our way up in the various frame rates. The first one that you'll probably encounter is 24 frames per second, and 24 frames per second is the traditional film frame rate. Go to a movie theater, watch the film back, and you're watching it back at 24 frames per second.

However, in these DSLRs especially if your camera setup to an NTSC mode, you're probably not recording true 24 frames per second, you're probably recording 23.98 or 23.976. Richard: And this is leftover due to backwards compatibility with the original television spec from the '50s? Robbie: Right, decades ago when we're doing things like introducing color into the signal and so on and so forth, we actually had to slow down the video signal just a touch to get it to be compatible with television sets that were out there.

So most of the times when we're shooting 24, we're actually shooting 23.98, which is shorthand really for 23.976. Richard: Although one of the things I've actually noticed is that there is some variation between cameras, even firmware versions. Many of the cameras that said 24 were originally shooting 24 until they updated the firmware. So, there's really no way to know exactly unless you record a file and then put it into your editing system and look at it. Robbie: Or of course you can read the manual. Richard: What? You're assuming that those are actually updated in timely fashion? Robbie: Right, no absolutely.

So the next frame rate that will find typically when we're in a PAL mode, PAL of course is television system that's used in Europe and other parts of the world is 25 frames per second, right? And 25 frames per second is used all the time for broadcast in Europe and other parts of the world, but it can also be used if you want a more filmic type look, you need to integrate with say PAL footage and things of that nature. Richard: And in this particular case like on the Nikon menu here, you're noticing that 25 isn't showing up, because all I have to go in and change my camera setup and switch it to from NTSC to PAL.

Robbie: That's correct. Richard: In order to access that, so-- Robbie: And it's the same thing on the Canon cameras as well. Richard: Yeah. They kind of hide that because they don't want you accidentally choosing it, like what video standard do you use, NTSC versus PAL is kind of a fundamental question. You could see on the map, it's going to vary based on country, but even this is not a hard and fast rule, because people in the US might be shooting PAL in order to deliver to a country that's going to broadcast in PAL, and I've seen places where even though it's a PAL country, like we don't care, it should be 24. Robbie: Well, it could be just a preference thing too. As I said before you know you might shoot 25 here in the United States just because you like that look of 25 frames per second, so it can become a preference thing as well.

Richard: So let's get onto the most popular one for broadcast, 29.97. Robbie: Or as a lot of camera will say 30 frames per second, right? Again, we have to remember sort of this fractional frame rate thing that's in play. So, 30 frames per second as you've pointed out, a lot of the early DSLRs when they first shipped it was a true 30 frames per second. Richard: And that's because these cameras were originally designed to make just web video. Robbie: Yeah. Richard: Nobody ever thought, what you mean you're going to take this video and put it on a broadcast signal? Robbie: But most of the cameras now and through Firmware updates and things of that nature are shooting when you're in NTSC mode, and you choose 30, are really shooting 29.97, which of course is a standard and typical broadcast frame rate here in States.

Richard: Okay so that makes sense if that's what you need to deliver, and then we've got this crazy option, and it will vary depending upon how your camera is set up, NTSC or PAL, 50 or 60 frames per second. Why would I choose that? Robbie: Well, first of all, most of the time the 50 and 60 options are only going to be available to in a 720 mode. Most of these camera manufacturers have not yet gotten 50 and 60 frames per second through the 1080 modes just because it's a lot of bandwidth and a lot of data to get onto the card and to process by the camera.

Richard: If you've ever had your camera overheat regularly shooting 1080 at 60 frames per seconds, it's just like, oh let's cook an egg. Robbie: Smoke will start coming out of it, yeah. But typically 50 would be for camera setup and the PAL setup, and 60 would be again for NTSC setup. Now just remember with NTSC 60 is really 59.94, again, that fractional frame rate thing is in play, and people will shoot these higher frame rates for really couple of reasons. First, shooting a faster frame rate will give you a more--I don't know--real sense of reality.

Things tend to move a little sharper. It's good for things like sports or other fast-moving stuff. Some people think it's a little too close to reality. Richard: Yeah, I was to say I don't get that look of video or film that I want. It just looks too crisp and too sharp to me, but I like it for slowing things down. Robbie: Exactly, and that's the next reason. If you shoot at a faster frame rate, say you shoot 720p 60, 60 frames per second, which is really, again 59.94. You could then slow that down to, say 23.98, and you get a nice slow-motion effect from that faster footage.

Richard: Yes, and that's all done in the post-processing, but the big thing here is like if I'm in my Movie settings, and I go ahead and I choose one of those 60 frames per second option, that's great, and I can use it. Now on my Nikon I don't even have a choice to shoot at 60. Well, we're going to pop up your Canon here in just a second and take a look at that. Same idea, different choices, different cameras so that maybe one factor as you're looking at buying a camera, deciding what frame rates you need. But I'm just going to be honest, the number of times I'm shooting 60 frames per second is like 3 or 4 times a year. Robbie: Yeah.

Yeah, and just one more thing about the 60 or 50 frames per second, if you're using it for slow-motion effects--which I'm sure we'll talk about in later episodes--just be aware that if you use slow down that video, your audio is also going to be slow down. So if you're going to shooting in one of those faster modes, just be aware of what the audio is doing as well. Richard: I don't under--Oh I get it. Robbie: Exactly. Richard: Exactly. Yeah, half rate, half audio speed. All right! So there you have it, which frame rate should you shoot. Most commonly, it's going to be 24 if delivering to the web or you want that film look. Robbie: Yeah. Richard: If you're going broadcast, you're going to be 25 or 30 or the fractional frame rate there up, and because based on what the client specified, and 60 if you want to get Motion Effects or you are trying to get that Hyper-reality, 50 same sort of thing.