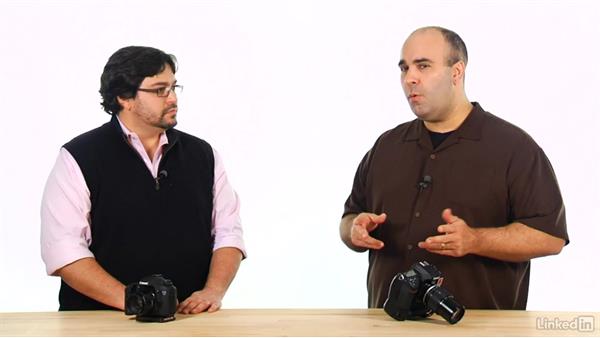 Richard: So Rob, one thing that pops up a lot, especially when I'm talking the photographers getting into shooting video is well, can I crop? People are so used to, they shoot the stills, great high resolution images, they can crop it after the fact. Robbie: Totally right. I've talked to photographers especially that have that very question they have it all the time, because you're right, they come in and they shoot something, and you know, they'll go, oh, that doesn't look right, I want to focus more on this part of the photo, that kind of thing. Richard: Oh, there is a lighting stand at the corner of the shop, can we zoom it up a little bit? Robbie: Right and they do it for aesthetic reasons, for technical reasons, and they are always asking can we do that same thing with video? And I say, well, sort of. Richard: How low are your standards? Robbie: And the reason I say sort of is because, obviously, when you're shooting a still photo, you're shooting 14, 15, 20 megapixels, and you just have a tremendous amount of resolution that's just inherent to that that native shot.

And so, if you're cropping into quite a bit, you still might end up with a 5, 6, 7, 8 mega pixel shot, even after you've cropped, and it'll look sharp, and it'll look great, right? However, if we start doing cropping on video-- and by the way, this often happens and always happens in post--we are not doing really a true cropping most of the time on the camera. When we start cropping into video clip, you have to keep in mind that the video clip originally, 1920x1080 is just over 2 megapixels, right? So if you start pushing into and cropping off portions of the shot, you're potentially going to lose information and have some image artifacting.

Richard: Well, you bring up an existing trick there, this is actually something we do a lot of here is maybe you shot 1080, but you're delivering at 720, which is an acceptable HD standard. So if you are going down in size, yes, you can technically crop in post. If it means that you have to scale the image down to see the whole frame, that's fine. And if you're dealing with the 4:3 deliverable, you might be panning and scanning and moving it around. Robbie: Center-cropping it, right? That's a really good point, and we talked about this in other episodes, when we talked about frame size that these cameras can record.

And it's always easier to go down than it is to go up, right? So if you're trying to--you have a 720p shot, and you're trying to crop in on that, you're going to have to blow up the shots to crop in. But if you have 1920x1080 shot that's in 720p project, you have extra resolution to work with. So it goes again more to that argument of, why not just shoot 1080 most of the time, even if you're shooting-- you are delivering a low resolution? Richard: Yeah. So, while you will find cropping in some your editing tools, people will do this with Motion tab or applications like Final Cut Pro X actually have a crop feature.

What you need to do is be very careful. A lot of times when you're editing video on your computer, you're looking at it in a little tiny window, so when you got that shrunk down in the small window, and you crop it or you're scaling it up, and you are recomposing the frame and post, you go, oh that looks great! And then you burn it off to a DVD or you play it back on the big monitor and go, oh, that looks like garbage. Robbie: Yeah. And I suppose it's one of these things, again, as you crop or blow into or push into photos excessively, you might have seen noise if you are doing photography, it's the same thing, if push into a video clip, you don't have to push in nearly as much, as you did, say on a photo, you're going to start noticing some of that pixalization and artifacting, so you just want to be very careful for that.

Richard: All right! So just be very careful when you're shooting, get the composition you need when you shoot it.