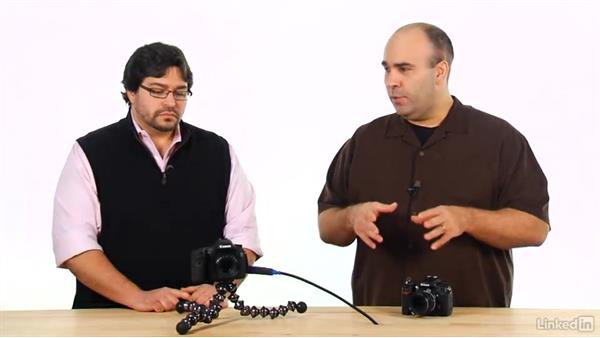 Robbie: One question that I get asked a lot Richard, I'm sure you do as well is hey I'm trying to buy a camera, should I buy a full frame camera or should I buy a crop camera. What is full frame versus cropped mean? Richard: I think people get really confused here, because you know everybody is automatically gravitating towards I need the full frame sensor, biggest is best, it's the SUV syndrome. Robbie: More expensive has to be better, right? Richard: Right. And you know we're going to explore the benefits of both crop versus full, but let's just focus on what they are. Robbie: Yeah. Richard: If you are going to go ahead and buy a DSLR camera, usually at the highest end of the DSLR line for most manufacturers is a full frame sensor, a camera like the Canon 5D Mark II.

This camera has benefits because the full frame sensor is really superior for photography tasks, higher megapixel count, less noise, better low light shooting. Robbie: And more light sensitivity exactly. Richard: And that's great, but these cameras are the most expensive. And one of the things I think a lot of people miss when it comes to DSLR video is that you're really not usually using that full sensor. There are benefits to it, but instead of putting all that money into the camera body, a lot of people are starting to route that money into better glass or lenses, which takes them to crop sensors, and you know the crop on this Nikon is slightly different than the crop on that Canon.

Robbie: That's actually a really good point, because the crop is not a universal standard, right? Nikon versus Panasonic versus Sony versus Canon. Everybody is going to have a slightly different crop factor, right? That's what we refer to it as. Richard: Yeah, ranging from thing like 1.3 for some of the higher-end Nikons to a 1.5 or-- Robbie: 1.6 on the Canons. Richard: Yeah, you know my Nikon 1.5 that's 1.6, you go to it like a GH2 or some of the Micro Four Thirds systems, and it's two. Robbie: It's two, right yeah. Richard: And these are all perfectly valid. Other cameras like the Panasonic AF100, that's basically a Micro Four Thirds system with a two crop factor.

Keep in mind though, you know we are saying oh well it's a crop sensor, you know that's so small. This still blows away every single traditional video camera. Robbie: Oh, yeah that's there is two points about that. First, these sensors are like you know Jupiter compared to our Moon when you compare you know this image sensors to traditional video camera size sensors. The other thing that I think is important is that everybody hot to trot on full frame sensors, and as you pointed out, great for photography, has there benefits for video of course as well, but a full frame sensor in say a 5D Mark II is actually way bigger than a 35-millimeter frame and a piece of 35-millimeter motion picture film, right? A 7D or some of these crop sized image sensors actually match more closely the frame size or the resolution of a 35-millimeter piece of film.

So, when people say oh you don't want to shoot with a crop sensor like a 7D because it's not as big, I don't buy into that argument, right? 35-millimeter motion picture film has been the standard forever, right? And when we have image sensors that are approximately that same size, I think that's good as well. And if you want to have a little bigger sensor for some, you know additional features that we'll talk about later throughout this title, you can go that route as well. Richard: Yeah I think that makes perfect sense. So when you're out there shopping, make sure you know there are differences between manufacturers as well as within that camera line. Typically the more expensive the camera, the more likely it has a lower crop factor or even a full frame sensor.

And the cheaper the camera, the more likely you're going to have that higher crop factor number. Robbie: That's right. Richard: So just gauge that as your shopping. Now this is not a number that they widely put out there. It's not like they advertise it as a feature or a-- Robbie: It's not a sticker on the box, right? Richard: No they tend to hide these things. One of the places I like to go to is digital photography review, you know basically through Amazon you can click to get this detail like 10-20 overviews of each camera model, it goes into the depth there and explains it, but you know let's go ahead and start to explore the specific benefits of crop versus full frame sensors next.