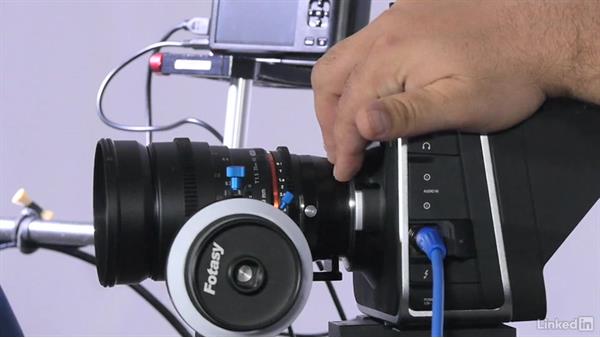 >> Hi, my names Rich Harrington. >> And I'm Robbie Carman. >> And Rob, we have got one of the most popular cameras out there. This is interesting here because this is the Blackmagic cinema camera, right? >> It is. Announced a couple of years ago, at NAB, everybody was taken back that Blackmagic, who has traditionally been a hardware developer for post production video capture cards. >> Yeah. >> Break out boxes, various things of that nature. All of the sudden came out with a camera, and the thing about it Rich was that it was basically a $3000 camera at the time, that did raw capture.

>> Yeah >> Now, besides cameras like Red and some of the other ones that were doing raw capture, those cameras were. 30, 40, 50, $60,000 plus and all of a sudden here was a camera that could record RAW, ProRes by the way, as well, and DNxHD. >> Yeah. >> The thing about it was that originally the camera was $2995. And by the way, it also includes. It included a, a full version of DaVinci Resolve color grain, professional color-grain software. Also Blackmagic UltraScopes, which are, a powerful set of software videoscopes, all included in the box.

Essentially you're getting the camera. And this software that's another $1,000 or $1,500 just thrown in. Since that NAB and just recently actually Blackmagic has actually lowered the price of the cinema camera down to $19.95. At $19.95, which is kind of, in my opinion it's a no-brainer. >> Well, you bought a second one you were so happy. >> Yeah, so originally. When the camera first came out, and this is why she went with something that's pretty important, when the camera originally came out there was, it was an EF mount only. Which meant it could only mount Cannon EF lenses natively. You could do some with adaptation. >> Yeah.

>> But it was an EF mount. That didn't make a lot of sense to people because you were taking these huge 35 millimeter lenses. And just putting that on a sensor it's actually a little bit smaller than a micro four third sensor. >> Yeah, and you actually have smaller lenses on here now and it's not putting too much weight on it. >> Right. So this is the MFT mount, the micro four third's mount and a lot of, in my opinion this makes a lot more sense. Because I can pretty much put any lens on it. This particular lens is a Nikon mount cinema lens. From Rokion. 35 millimeter lens. Full manual. I just have a little Nikon two micro four thirds mount. I can adapt PL.

I can adapt old Canon FD glass, Nikon glass. Whatever it may be, and it works really great. >> Yea, and it's very flexible. And, I think there's a lot of things attractive with this camera, I mean. The raw shooting, the direct SSD, Pro-Res, DNXD, HD, all in one box. Very, very flexible. I think, you know, the price cut made this more attractive, and I think for a lot of folks who are, coming from a DSLR background, this means that they've invested in lenses And support equipment. They're not out of, they're not out of luck, are they? >> No, and this is, this is what I've been telling people.

I get a lot of people asking, hey, should I get the EF mount version? Could I have the, the MFT version. And a lot of our viewers, Rich, are going to have a large investment in lenses cause. >> Yeah. >> You know, you've shot photos for years or you've been, you know, part of the DSLR revolution. And my idea is, if you have a ton of Canon glass. Get the EF mount version, right? because you can utilize those lenses. The EF mount version of this camera, can actually take electronic control over the lens. So you can electronically adjust aperture things of that nature. The MFT version, unfortunately, it's a passive MFT mount.

So if you do have active MFT glass for a Panasonic camera or an Olympus camers, or something like that. They're going to become full manual lenses. Same thing with like for example if I wanted to get a EF to MFT adapter on here, I could use a piece of Cannon glass, but when I put it on here, the aperture is always going to be set to wide open, right? >> Yeah. >> It's a little maddening. >> It makes no sense to me and actually when we come back we are going to talk about some of the downsides and we'll start with that one. >> Yeah. >> Is why it's not powered. So we'll be right back and take a look at some of the negatives of these cameras.