Working with windows and docking 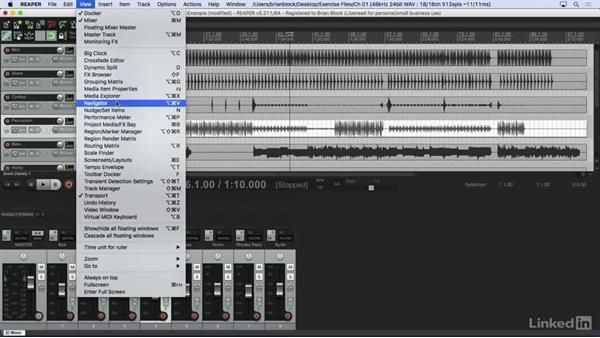 REAPER has many more tools and windows than you can initially see. In this video, Brian will guide you through the process of using the "docker," the space that allows you to attach and detach as many windows as you want. You'll be able to dock and undock windows, resize individual windows, and apply a number of different windows to the docker to set up REAPER so that you can quickly access the tools that you need.

- [Voiceover] Let's turn our attention to this area below.…You can see that here we have a mixer…with the master fader and faders corresponding…to each of the individual tracks…that we have already set up.…If I move one of the faders,…you can see the volume knob in the track controls…start to move.…The area that the mixer is in is called the docker.…Many of Reaper's windows can be docked to the docker…to make finding the tools that you need much easier.…

It can also be undocked, so that they become…freefloating windows.…Let's try that with the mixer.…Right-click in the area just outside of the mixer.…Notice how "Dock Mixer in Docker" is checked.…Go ahead and click that to separate the mixer…from the docker.…Now it's a freestanding window that I can move around.…I can make the window bigger or smaller…by dragging the edges or corners.…If I wanna see more of the mixer,…like the slots for effects and sends,…you can make the window taller.…

This is very useful especially if you have…more than one monitor.…You can drag the mixer to the second monitor…

Video: Working with windows and docking