Understanding the menus and toolbars 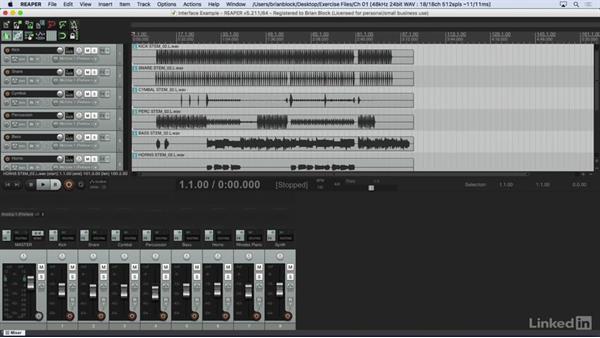 Brian Block gives you an overview of the standard REAPER menus and toolbars when it is in its default configuration so you can get a handle on what the menu functions are and where to find them in the interface. This video will get you up and running with the basic functionality of the REAPER application.

- [Voiceover] Now that you can customize the interface,…let's take a look at the different menus and toolbars…that REAPER has to offer.…Let's start from the top…and work our way down the interface.…Up at the top you have the menu bar.…Now this functions like any menu bar in most applications.…You can click the individual menus…to see the commands under each one.…You have familiar items like File, Edit, and so on.…We'll be using a lot of these in the future.…The menu bar also has information about the project,…which is also a menu.…You can see the current sample rate,…and if you click and select Recording Path,…you can see the location of the project.…

You can right-click this menu to open it on a PC.…Just to be clear, when I did that…I wasn't actually choosing the destination drive,…I was just displaying it.…We'll get into choosing the drive later on…when we talk about setting up a new project.…Now let's talk about the toolbar.…That's this group of buttons over here on the left.…They are all very useful for different scenarios,…

Video: Understanding the menus and toolbars