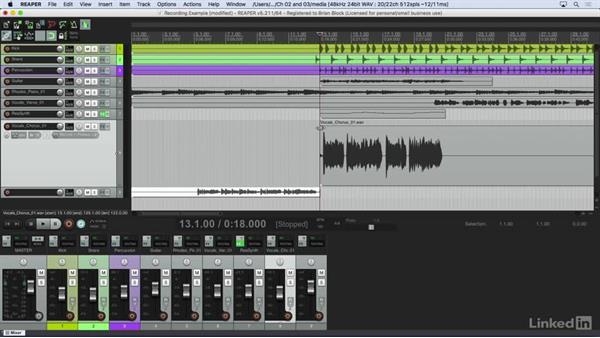 - [Voiceover] Let's take a look at two of the most…common editing tasks: split and trim.…Splitting allows you to make two or more media items…from one longer one.…Since it's really easy to do this in Reaper,…let's just jump right in.…I want to focus on this vocal track here on the bottom.…Let's take a listen.…♫ Every second every hour…♫ I am calling for you…♫ Calling for you…♫ Every second every hour…♫ I am calling for your heart…♫ A-MAR-IL-IO ♫…Let's say I wanted to take that first part there…and separate it from the rest of the recording.…

Maybe put it on its own track.…To find a good spot to do that,…I'm gonna put my play head here right before the drums…and the guitar come in and now to make a split…in this media item, I'm gonna hit S on my keyboard.…It's the same on Mac and PC.…Now this media item is separated…into two distinct media items.…I can move this new item down to a new track…by clicking and dragging.…Notice how Reaper just automatically makes a new track…for me when I move something down there.…Like most things we've done so far,…