Setting up a new project 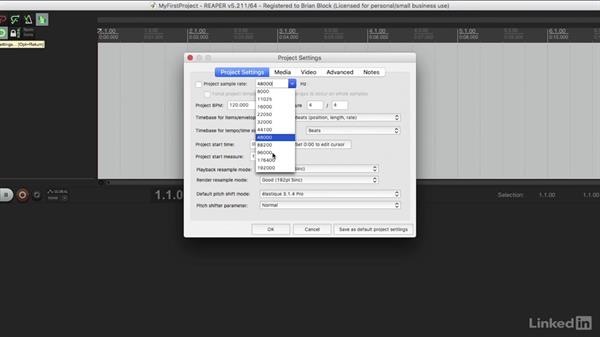 Setting up a new project in REAPER can be as simple or complicated as you want it to be. As with everything in REAPER, the new project settings can be customized to make starting a new session painless. In this video, Brian Block will show you how to start from scratch and edit the new project defaults so that you can get the most out of REAPER faster.

- [Voiceover] Let's take a few moments to talk about…setting up a brand new project from scratch.…We'll take a look at how to set up a project directory…and how to adjust some basic project settings.…Before we start though, let's make a quick adjustment…to make our lives a bit easier.…Go to the Reaper menu and go to preferences,…and then we're gonna find the project menu.…Check the box that says prompt to save on new project.…Why does this make our lives easier?…Well by default, Reaper will just begin a new project…when I click new project.…

It would be up to me to save it.…By checking prompt to save on new project,…I'm telling Reaper to save, name, and direct the project…file before I even begin working.…Of course you don't have to do this,…but it saves the headache of setting up directories…after you've already started working on your project.…Hit apply and then we'll close the window.…Now we're ready to create a new project.…Hit that first button in your toolbar…to create a new project.…It's asking me if I wanna save the project I was working on.…

Video: Setting up a new project