Setting up the appearance and layout 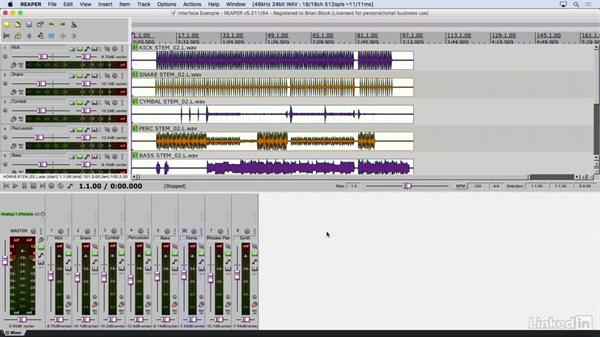 REAPER has a variety of tools enabling you to customize just about everything about the interface. The software comes with a few themes to choose from as well as options to change everything from the layout to the colors of individual UI elements. In this video, Brian Block will show you how to change various aspects of the UI as well as how to set the appearance and layout to default so that you can follow along with ease.

- [Voiceover] One of the major highlights of REAPER…is its highly customizable interface.…REAPER is very flexible, and can be catered to…a variety of audio production tasks,…so it's appearance can be optimized…to suit your specific needs.…REAPER can be customized in broad strokes in two ways.…Themes and layouts.…Themes can change the colors, icons and fonts,…and layouts can change…the configuration of the elements and controls.…Now, why would you want to change the interface?…Well, certain configurations are…more convenient for certain tasks.…

For example, if you were doing some precise mixing…and you wanted to see big meters in your track controls,…you could do something like this.…Go to options, layouts, track panel,…and then find something with a full meter.…I'll try this small full meter.…Now I've got a big volume read out for each of my tracks.…Feel free to play around with some of these…when you're working, until you find something…that fits what you're working on.…Changing the theme has a different,…potentially more drastic, effect.…

Video: Setting up the appearance and layout