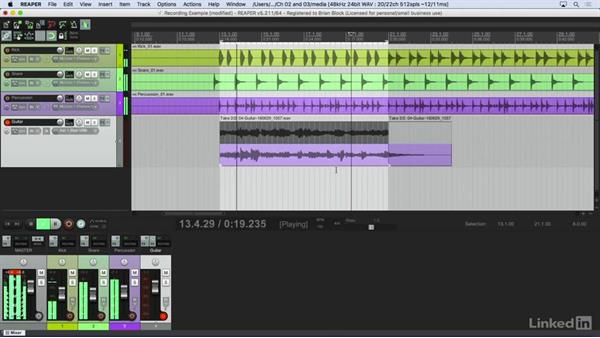 While recording, you may want to be able to iterate on your performance for a particular section of a song without having to stop and start over and over. REAPER allows you to record multiple takes within the same recording session. In this video, Brian Block will take you through the process of looping through a section of a song so that you can record and save several takes. This feature is great for writing music because it allows you to record the same part repeatedly without losing anything.

- [Voiceover] Let's talk about how to record multiple takes…and give yourself a variety of performance options.…Sometimes you want to do complete or longer takes…in order to nail down your performance of a song.…Let's set up REAPER to allow us to do this.…First things first,…go to Options, Record Mode Normal.…We'll do this because we don't want to replace anything.…We actually want to record and display ever attempt…at recording this part.…In addition to setting the recording mode,…let's set up how the takes behave.…So I'll stay here in Options and go to…New Recording That Overlaps Existing Media Items,…and then I'm going to select Splits Existing Items…and Creates New Takes.…

Let's also make sure that Options,…Show All Takes and Lanes is checked.…This way, we'll create a new sub-lane within our tracks…when we record over an existing media item.…Let me show you how this works.…I've shortened my guitar part and…I'm going to give it another whirl.…Everything should be ready to go except…I need to make sure I'm arming my track,…