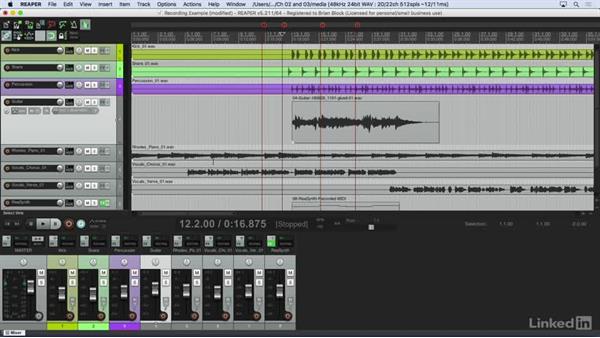 If you're working on a bigger project with a lot of tracks and media items, it might be useful to make notes for yourself. REAPER accommodates note-taking with markers. In this video, Brian Block will demonstrate the use of markers in REAPER and how to use them to make effective notes while you're editing media items.

- [Voiceover] If you're working on a larger project, or a…project that has specific instructions for someone else,…you may see the need to make notes in your project…in order to remember things.…In this video, I'm going to briefly talk about markers,…and how they can make your life a little easier.…With markers, you can mark specific points in…time in your project to signify a change in key,…a place to add a new media item in the future,…or communicate something to someone else…you may be working on the project with.…To create a marker, simply place your play head…anywhere on the timeline and hit the M key on your keyboard.…

That's the same on PC and Mac.…So now I have this little marker in my project.…I'll go ahead and make another one.…Click there, hit M, and I've got another one.…Notice how they're numbered in the order that I made them.…You can also create markers while the project is playing.…Same way.…You just play.…[Music Starts]…And hit M whenever you want to make a marker.…One there…And make one there.…