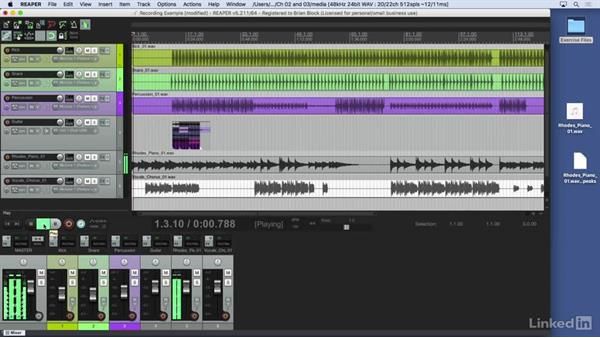 Adding to your project may mean adding pre-recorded audio files from a location outside of your project folder. In this video, Brian Block will show you how to properly import media files to use alongside your recorded tracks. This is useful for bringing in tracks recorded by someone else or adding sound effects or backing tracks to your piece.

- [Voiceover] Not every media item…that you'll be working with…is going to be generated within Reaper.…You may find that you want to include…pre-existing recordings, sound effects, and so on.…Luckily, Reaper makes importing media files really simple.…I have a piano part here on my desktop,…this Rhodes Piano 01 dot wav.…I can simply click and drag this file…from my desktop to my Reaper project.…I can put it on an existing track…or if I drag it below the existing tracks,…I can put it on its own.…Reaper will create a new track for me automatically.…

There we go.…Notice how, when I did that,…another file was created on the desktop.…That's the peak file.…Reaper creates those when you import media.…It's Reaper's way of storing…the graphical information about the waveform…so that your project loads faster in the future.…These can be deleted if you choose,…but Reaper will keep creating them…every time you open your project,…so it's not really worth going through…and deleting the peak files.…So now we've imported this file from the desktop…