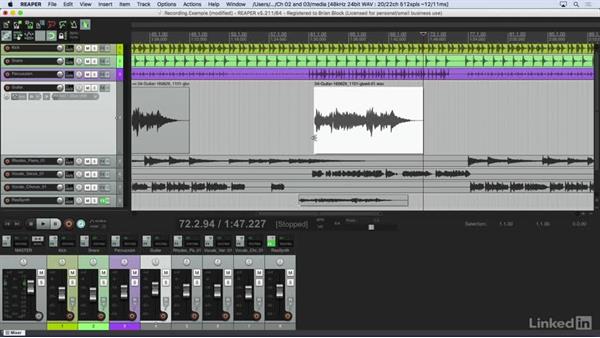 - [Voiceover] Let's take a look at the guitar track.…I'm gonna go ahead and extend this track vertically…by clicking down here at the bottom of it and dragging.…I'm also gonna zoom in just a little bit.…There we go.…Because it's only been recorded for that one section…it doesn't extend to the rest of the song.…So let's say I wanted this guitar part to repeat…exactly as it is later in the song.…I'm not gonna rerecord it, since it's just a supplemental…part anyways.…I'd like to just copy it and paste it.…

Luckily Reaper handles copying and pasting just…like most other software.…You can use the same keyboard shortcuts…you might be familiar with.…Command C on a Mac and Control C on a PC…will copy this media item if it's selected.…So I'll click it to select it, hit Command C…and now it's copied to my clipboard.…I can paste it anywhere on the timeline…or in any other track by placing the play head…where I want to paste the item and then just…press Command V or Control V on a PC to paste.…

Because I have the guitar track selected…