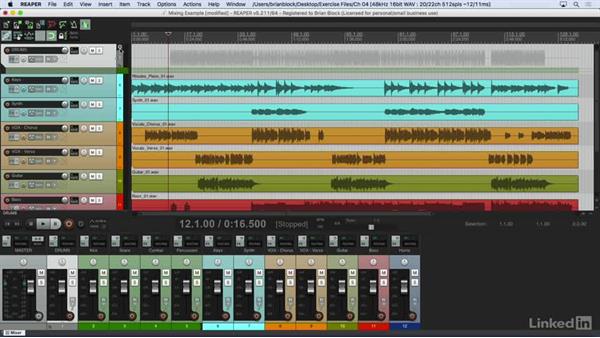 - [Voiceover] Let's take organization a step further…and talk about folders.…Tracks can be grouped together using track folders.…This can help greatly with organization,…and also creates a sub mix,…meaning you can have several tracks in a folder…and use the controls in a single folder track…to manipulate all the tracks in that folder.…This is super useful for being able to mix drums,…for example, without having to manage…the volume of each individual drum track…once you've set them.…Let's give it a try with the drums for this song.…First thing I'm going to do is…create a track that I can turn into a folder.…

Because I have my drum tracks at the top,…I'm going to select the first track…and hit Command + T. That's Control + T on a PC.…I've got a new track, and I'm going to call it drums.…To make this a folder,…this has to be the first track in a series,…so I'll just drag it up here to the very top.…This little folder icon in the bottom right…of the track I just created…is how you transform it into a folder.…Watch what happens when I click it.…