Backing up your project 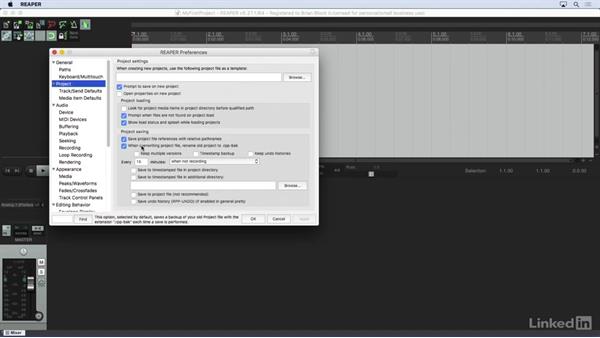 Saving often is a great habit to get into, but sometimes things happen that are out of your control. That's where automatic backups come in handy. In this video, Brian Block will show you how REAPER automatically creates backup points for your projects and how to change the frequency and content of those backups.

- [Voiceover] If you've looked at the root folder…of your freshly-made project,…or any of the projects from the exercise files,…you may have noticed a file with the -bak extension.…That's the backup file.…It contains information that can restore your project,…if the software crashes, power goes out,…you close without saving,…or any other issue that might cause you…to otherwise lose data.…Saving frequently is always a good habit to get into,…but things happen from time to time…and REAPER has a system in place to back you up…so that you don't lose all your work…in case of a catastrophe.…

Basically, REAPER automatically creates backups…of your work at specific time intervals.…How often?…Well let's find out.…I'll go ahead and close this window,…and get back into REAPER.…We're going to go to the Preferences menu.…It's important for me to note that it's actually Options.…Preferences on a PC,…the PC version doesn't have this REAPER menu here.…So go to Preferences,…and then we're going to look at the Project menu.…Under Project saving, we can tell REAPER…

Video: Backing up your project